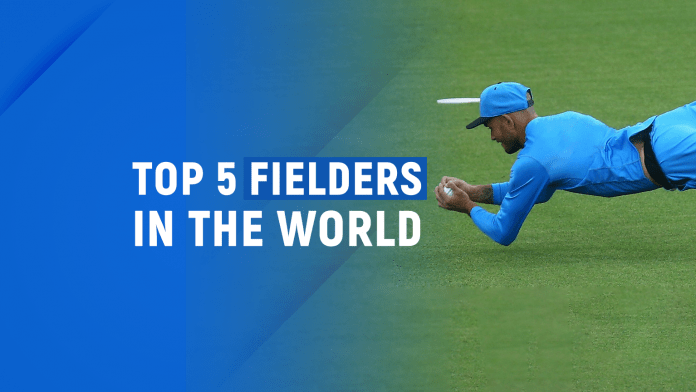 Long gone are the days when only batting and bowling were important aspects of cricket. Since the introduction of fast-paced shorter formats of the game, fielding has become the most important criteria for teams when deciding their playing XI. Today we look at the list top 5 fielders in world cricket:

(D/I is dismissal per innings ratio)

The lanky, left-handed Kiwi all-rounder made his debut against England on 9th June 2015. Often compared to the legendary D. Vettori, Santner slotted perfectly in the Black Caps side after the retirement of the former. Although Santner isn’t as lethal a bowler as Vettori, one field where he excels his idol is the fielding department.

Santner first made headlines with his fielding against Sri Lanka in November 2015, where he brilliantly saved a 6 due to his exceptional athleticism. Generally, he is the mainstay at point region during powerplay and the long-on position for the rest of the match. Santner has taken 80 catches throughout his career with a 0.402 dismissals per inning ratio.

One pillar of the fab-four, Smith is often described as the Bradman regen by the Baggy Green faithful. Known for his unorthodox batting style, Smith was mostly famous for his leg spin bowling and tenacious fielding earlier in his career. In 2012, Smith produced one of the best fielding efforts in the history of Indian T-20 League when he channelled his inner eagle to save a 6 while playing for the Pune franchise.

Usually one of the safest pairs of hands in the slip cordon, Smith has taken 254 catches throughout his career with an impressive dismissals per inning ratio of 0.709.

The reliable Kiwi opener is the next entrant in our list. Since last decade Guptill has been omnipresent as the aggressor of the New Zealand top order. But what separates him from the rest is his bullet arm and lightning fast reflexes. The batsmen need to be wary of his presence whether it’s in the slip cordon, inside the circle or near the boundary ropes.

His most memorable piece of fielding came at the most crucial moment in the semi-final of the 2019 World Cup against India when his 45 metre throw took the bails off before MS Dhoni could reach the crease. Guptill has an impressive 0.547 dismissal per innings ratio across all formats of the game.

The extravagant shot-maker from Victoria strikes fear in the hearts of bowlers with the bat in his hands. Often called as ‘Maxi’ by his loved ones, his presence and skills on the field are similar to former Australian skipper Ponting. Ponting described Maxwell as the best fielder in the world during the 2017-18 domestic T-20 season.

He is Australia’s most reliable fielder and is generally present in the point region during powerplay and long-on, long-off region for the rest of the match. In his decade long international career, Maxwell has taken 123 catches with a dismissal per inning ratio of 0.549.

The ‘Jack of all Trades’ hailing from Saurashtra tops our list as the best fielder in the world. Over the years, ‘Sir’ Jadeja has exhibited his exceptional fielding skills to help India win crucial games. His performance against New Zealand in the 2019 ODI World Cup was one of the best displays of outfield fielding, where the highlight was Jaddu’s 50-yard direct throw to run-out R. Taylor.

He saved a record 41 runs in just 2 matches in the 2019 World Cup, where the next best was Guptill who had saved 34 runs while playing 7 more matches than Jadeja. India’s own version Rhodes, Jadeja has a comparatively lower dismissal per innings ratio of 0.36 but has taken 126 catches in his international career.

With this, we conclude the list of the Top 5 fielders in world cricket as of 2022. As you create fantasy teams on MyTeam11, make sure to add them to your team with their outstanding record. In major leagues like Indian T20 League and World Cup, these players have also been ranked in the top fantasy player list of MyTeam11. Don’t forget to create your teams on MyTeam11 and enjoy big winnings with fantasy cricket. Keep playing, keep winning!