Top 5 Deliveries of Indian T20 League 2020, the Glory of Bowlers to Watch Out 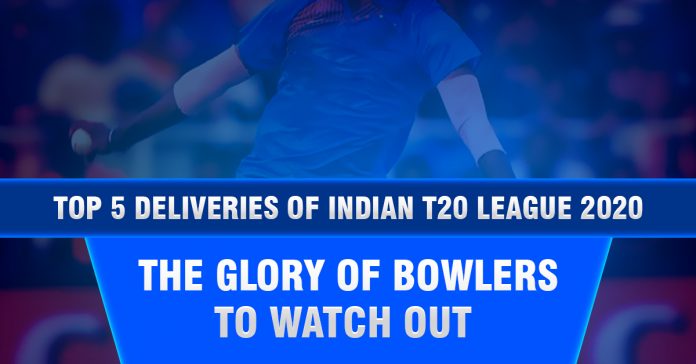 The Tewatia show against Punjab, KL Rahul carnage against Bangalore, or ABD’s fireworks against Rajasthan; are the most amazing batting knocks. But Indian T20 League 2020 was not just about the power-hitting. T20 is a game about skills, and sometimes, bowlers surprise you with some extra-ordinary deliveries.

Anrich Nortje's fastest delivery against Rajasthan, Rashid Khan’s most economical spell against Delhi, or Natarajan’s record-breaking numbers of yorkers – UAE witnessed some finest bowling moments, and in this particular segment, we break down 5 best deliveries in Indian T20 League 2020.

Can I call it the finest delivery of the season? An uncapped Indian pacer removes the finest T20 batsman with a terrific yorker. Bangalore was facing Hyderabad in the eliminator, and they were in deep trouble. ABD was batting on 56 off 42 balls, and we all know how dangerous he is when he gets set. With ABD in the middle, Bangalore was looking to get 150, but Natarajan surprised ABD in 18th over. He bowled the finest yorker just outside the leg, and it broke the middle stumps. He didn’t generate enough pace (136kph), but the execution was perfect. This one delivery restricted Bangalore on 131, and Hyderabad chased down this target with ease.

This encounter is more famous for the double super-over, which happened for the first time in the history of T20 cricket. We all know the end, but we don’t know the base. Punjab was almost on a winning situation, and KL Rahul was in fabulous form. The Punjab skipper was batting on 77, and his side required just 24 off 16 balls.

Rohit Sharma showed faith on Bumrah, and the pacer delivered in the 18th over. The number 1 T20 bowler bowled a 149kph yorker, and Rahul played inside the line, but he couldn’t stop Bumrah’s ball from making him out. With this wicket, Mumbai managed to stop Punjab before the finishing line, and the match ended in a super-over.

It was a fascinating battle between Nortje and Buttler. The English batsman was playing with a different mindset. Nortje was using extra pace, and he also bowled the fastest delivery of the season. Buttler used his pace to find three cracking boundaries. He was batting on 22 off just eight, and Rajasthan moved to 37 in 3rd over. Nortje continued his pace and didn’t give Buttler a chance to settle. His head fell into the off-side, and the ball hit the stumps. It was a 155kph delivery, and the South African used this speed to shatter Buttler. Delhi eventually won the particular match by 13 runs.

Varun Chakravarthy has surprised everyone with his mystery spin. He also bagged the maiden 5-wickets haul this season and earned the national call-up the same week. Kolkata was up against Chennai, and they kept Chennai controlled by picking early wickets. Chakravarthy tested Dhoni with different variations in the spin. He dismissed Dhoni twice this season, and in the first dismissal, Dhoni went for a reverse sweep, losing his wicket. The second dismissal came within a pressure. The Chennai skipper tried to save the wicket by going front foot and back foot respectively. He just patted to the same fielder twice. This time, Chakravarthy tried a bit quicker delivery (106kph) and used the wider crease. Dhoni failed to adjust to the pace and lost his wicket.

Lockie Ferguson was playing his first match of the season, and both Hyderabad and Kolkata were coming off two straight losses. The New Zealand seamer bowled exceptionally, starting from the first over. In his first 3-overs spell, he conceded just 8 runs. Ferguson has the seam power, and he uses the yorker even with the new ball. Manish Pandey was managing Hyderabad’s game, and Ferguson delivered a 148kph yorker. Pandey stayed on the stumps' leg side, and the ball hit the base of the offside of off stump. Kolkata won this match in super-over, which was also led by Ferguson, who scalped two wickets in super-over.