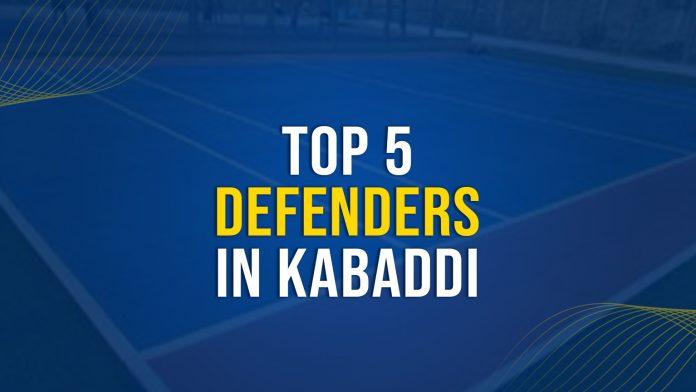 As Sir A. Ferguson said after winning the 1999 treble, “Attack wins you games, defence wins you titles”, the saying is true for every team sport. Kabaddi is known for its high-tempo raids but the work and effort of defenders never goes unnoticed. Let’s take a brief look at the Top 5 Defenders in Kabaddi for the 9th season of Indian Kabaddi League.

The left-corner defender of the Delhi franchise sits at number 5 in our rankings. After a promising debut season with Delhi in 2016, Dhull has never looked back. His prime performances came for Jaipur in the last 3 seasons where he has scored 194 tackle points in 63 matches.

Defending champions Delhi signed Dhull for just ₹40 Lakhs in the 2022 auction. Coach K. Hooda was ecstatic after the franchise managed to grab one of the best defenders in the league to strengthen the squad.

The ‘King of Ankle-Hold’ sits at number 4 in our rankings. Hailing from Una, the 25-year old defender is renowned for his firm grip and tremendous strength. Since his debut in 2016 for Telugu, Vishal has grown his game by leaps and bounds. He managed to score 71 tackle points in his second season and was third in the rankings for the ‘Best Defender’ award.

Retained by Telugu for the 5th consecutive season, Vishal has played 84 matches for the franchise and has scored 250 points. In the all-time list, he ranks 4th in terms of average tackle points per match with 2.98. Despite his young age, Vishal will lead the side in the 9th season of Indian Kabaddi League.

Leader of Telugu’s defensive trio of V. Bhardwaj and S. Singh, Parvesh is a prime example of consistency. He scored 86 points in season 6 for Gujarat and led them to the finals. Primarily playing as a left defender, he has scored 253 tackle points in 105 matches over 5 seasons.

Telugu bought the star defender for ₹62 Lakhs in the 2022 Indian Kabaddi League auction. Parvesh will be the leader of the most balanced and strongest squad this season as they look to get their hands on the coveted trophy for the first time.

The 30-year old veteran Iranian defender is widely regarded as the best defender in the history of Indian Kabaddi League. Fondly known as the ‘Sultan’, Fazel won the title on two separate occasions, once with Mumbai in 2015 and then with Patna in 2016. He was also named as the ‘Best Defender’ in 2016 and 2019.

He became the most expensive overseas player in the 2022 auction when Pune bought him for ₹1.38 crores. Fazel has scored 374 tackle points in 127 matches and averages 2.94 tackle points per match. Apart from his brilliant grappling skills, Fazel is also known for his leadership and is leading Pune in season 9 of Indian Kabaddi League.

The 25-year old is currently the best defender in the game. Majorly playing as a right cover defender, Nitesh created history in 2018 when he became the first player to score 100 tackle points in a single season. He won the award for ‘Best Defender’ in 2018 for his record-breaking performances.

Now you know who are the best defenders in the Indian Kabaddi League. Join the exciting kabaddi action on MyTeam11 and create your fantasy teams now. MyTeam11 also offers fantasy contests with huge winnings in several sports like cricket, football, basketball and many more. Apart from fantasy, you can also play lucrative card games like Rummy and Poker. So, what are you waiting for? Start Playing, Start Winning!