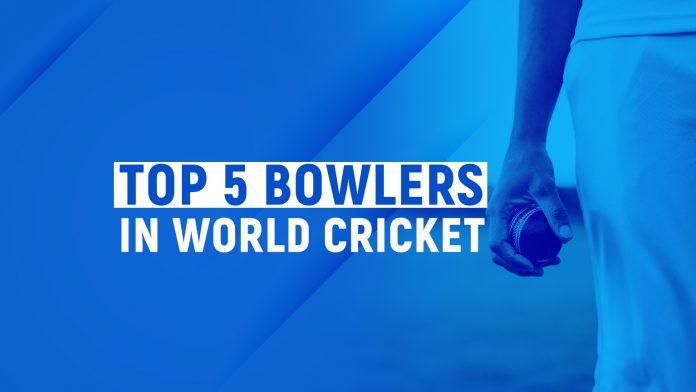 When a ball travelling at 100 miles an hour sends the stumps flying in air or when a spinner finds the gap between the bat and pad to clip the bails, these are some of the most spectacular sights in cricket. Today we look at the list of top 5 bowlers in world cricket who are capable of producing such moments.

The prodigal 22 year-old pacer from Landi Kotal is the first entrant on our list. In 2017, Afridi picked 12 wickets and was named as ‘Rising Star of the Tournament’ in the 2018 U-19 World Cup. The following year at the age of 17, Afridi made his international T-20 debut for Pakistan against West Indies. His breakout campaign was the 2019 ODI World Cup where he took 16 wickets.

Since then Afridi has gone on to become one of the best pacers in the world. 2021 proved to be a fruitful year for him as he picked up 78 wickets in 36 international matches. As a result of his exceptional performances, he became ICC Men’s Cricketer of the Year in 2021. Currently the pacer is in rehabilitation to make it to the final squad of 2022 T-20 World Cup later this year.

The current world number one T-20 bowler is the next entrant on our list of top bowlers. Dubbed as the next McGrath, the lanky pacer from New South Wales was the youngest player in 2008 U-19 World Cup. In 2010, he made his international ODI debut for Australia against arch-rivals England. Hazlewood picked 7 wickets in 5 matches for the Aussies in their 2015 World Cup winning campaign.

In 2015, Hazlewood was the first player to win Player of the Match award in a day-night test match. In his decade-long career, he has picked 366 wickets in 154 matches across all the formats of the game. Hazlewood became the number one T-20 bowler in June 2022 and is still sitting at the top. He will be a part of the Australian pace trio alongside Cummins and Starc in the upcoming T-20 World Cup.

The first and only spinner included in our list is the Afghani leg-spinner R. Khan. Credited as first global superstar from Afghanistan, Khan made his ODI debut in October 2015 against Zimbabwe. Since then, he has been bullying opposition batters especially in white-ball cricket. Khan’s career saw exponential growth since his debut and in 2018 he topped both the ODI and T-20 bowler rankings.

In 2018, Khan led Afghanistan against Zimbabwe in World Cup qualifiers and became the youngest international captain. He was named Men’s T20I Player of the Decade in 2020 and the following year became the fastest bowler (matches) to claim 100 T-20I wickets. He has taken 310 wickets in 159 international matches and looks set to have an exciting T-20 World Cup with Afghanistan.

At number 2 in our list is the Australian test captain and star fast-bowler P. Cummins. He made his international debut at the young age of 18 but was sidelined till 2015 due to many injuries. After completing his rehabilitation, Cummins was included in the Australian squad for the 2015 ODI World Cup. Cummins has claimed 362 wickets in all 3 formats of the game and has been sitting at the top of test rankings since 2019.

In the 2020 auction of Indian T-20 League, Cummins became the most expensive overseas player in league’s history when the Kolkata franchise bought him for ₹15.5 Cr . Cummins also scored the fastest half-century (14 balls) against Mumbai in Indian T-20 League. After the resignation of T. Paine from Test captaincy, Cummins became the next captain of the Baggy Greens. The Australian side led by Cummins crushed England 4-0 in the 2021-22 Ashes series. Cummins alongside Hazlewood and Starc is all set to defend their title in the upcoming T-20 World Cup.

“BOOM-BOOM Bumrah strikes once again!” Cricket fans all-around the world have heard this on a regular basis since Bumrah made his debut for the Men in Blue in 2016 against Australia. The Ahmedabad-born pacer made headlines with his unorthodox bowling action and toe-crushing yorkers. Initially a white-ball player, Bumrah made his Test debut against England in 2018. He claimed 48 wickets that year in Test matches, which was highest for an Indian bowler in their debut year in Test Cricket.

In a short span of time, Bumrah has become one of the most successful Indian bowlers in overseas conditions. Bumrah was India’s leading wicket taker in the 2019 World Cup. He is also the 2nd fastest Indian bowler to take 100 ODI wickets and the only Asian bowler to take 5 wickets in single innings against South Africa, England and Australia in a calendar year. Currently 4th in ODI rankings, Bumrah topped the bowling charts in 2018. He is all set to lead the Indian pace attack in the upcoming T-20 World Cup as Men in Blue look to end their drought of winning a major cricket tournament.

The next time you make your fantasy cricket teams on MyTeam11, these bowlers can be superb additions to your lineups. You can also create fantasy teams in various sports like football, kabaddi, basketball on MyTeam11. Till then, Keep Playing, Keep Winning!