Top 5 All-Rounders in the World 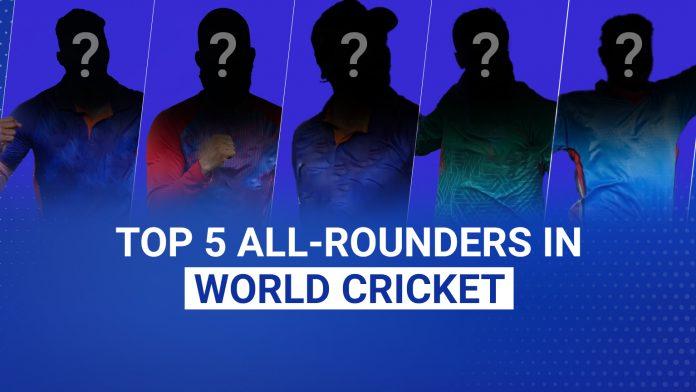 All-rounders are the most important cog in a cricket team. Whether it is pinch-hitting with the bat or breaking an important partnership with the ball, all-rounders have to be the jack of all trades for their team. Let’s have a look at the top 5 all-rounders in the world in T20 cricket.

The captain of Afghanistan side in limited overs cricket sits at number 5 in the list of top all-rounders in cricket. Along with leg-spinner R. Khan, he is credited to take the Afghan Cricket Team from minnows to major challengers in white ball cricket. Nabi made a name for himself in the domestic T20 leagues around the world as a utility player and is also the first Afghan cricketer to play in the lucrative Indian T20 League.

Economical with the ball and aggressive with the bat, Nabi has scored 1669 runs and taken 83 wickets in 101 T20I matches. Currently Nabi sits at the top spot in official all-rounder rankings in T20Is and is expected to guide Afghanistan to the World T20 semis for the first time in their history.

The hot-headed captain of Bangladesh Cricket Team is regarded as one of the best players of this era. Consistent in all 3 departments of the game, Al Hasan has won 3rd most Player of the Tournament awards in cricket history. Currently sitting at number 2 in official T20 all-rounder rankings, he is also the number 1 ODI all-rounder.

Al Hasan holds the record for most wickets in T20Is with 122 scalps in 102 matches. He has scored 2061 runs along with 10 half-centuries for Bangladesh. The 2022 World T20 Cup would probably be the last major T20 competition of the 35 year old all-rounder and would be looking to end it on a high note.

One of the most explosive players in international cricket, Maxwell will be a key player for the Aussies in the upcoming World T20 Cup. Popularly known as ‘Maxi’, the 33 year-old Victorian all-rounder sits at number 6 in official T20 rankings. Explosive with the bat, clever with the ball and outstanding in the field, Maxwell was a key player in the 2021 Championship campaign.

In 92 games for Australia, Maxwell has scored 2025 runs and picked up 36 wickets in his 10 year-long career. Renowned for unorthodox cricket shots, Maxwell becomes even more lethal in home conditions and would be crucial for Australia to retain the title.

The vice-captain of the England team in the limited overs format, Ali occupies the second spot in our rankings. Ranked number 3 in official rankings, Ali would be crucial for the English hopes for a successful World T20 Cup campaign. Over the years, playing in domestic T20 leagues has helped Ali to transform from a bowler to a batting all-rounder.

Since his debut in 2014, Ali has featured 63 times for the national team. During this tenure, he has scored 943 runs at an average of 22.45 and claimed 40 wickets at an average of 26.80. Ali recently captained England for the first time in a 4-3 series win against Pakistan and would hope to transfer the same momentum in the World T20 Cup.

At the number one position in our rankings is India’s beloved hard-hitting H. Pandya. Despite lower official rankings, Pandya is the most fearsome all-rounder in world cricket. Since his return from injury earlier this year, the leadership and match finishing skills with both bat and ball have been unmatched.

In 73 matches for Men in Blue, Pandya has played mostly the role of a finisher and has scored 989 runs. Pandya is back to his best with the ball and has picked up 54 wickets in 7 year-long T20 career. Pandya led the Gujarat franchise to a championship victory  in their maiden Indian T20 League season and is full of confidence. Team India would be expecting similar exploits from him in the upcoming World T20 Cup.

This is the current list of the best all-rounders in the world. They can be part of your fantasy cricket teams on MyTeam11. Log onto MyTeam11 to take part in the World T20 Cup by creating fantasy teams and stand a chance to win big rewards. So, what are you waiting for? Start Playing, Start Winning.