Top 10 Richest Cricketers in the World 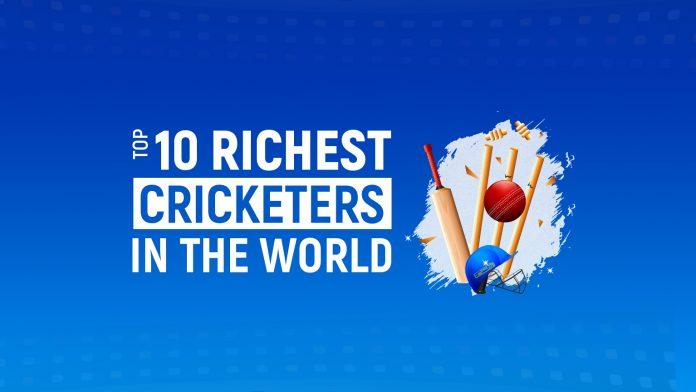 Cricket has been around for over a century. The sport has produced some of the all-time great players who changed the landscape of the game forever. Here’s a list of the Top 10 Richest Cricketers in the World who still rule the cricketing and media houses with their extravagant net worth. Let’s take a look at them:

Top 10 Richest Cricketers in the World

Virender Sehwag has many records to his name. Sehwag was known for his explosive and unorthodox batting style. Having scored over 300 runs in Test matches twice in his career, Sehwag is arguably one of the best Indian batters to play for the country.

Viru gathered this massive net worth from his board salaries and league contracts. Moreover, he has been a face for various brands that pay him hefty fees like Boost, Samsung Mobiles, Adidas, MyTeam11 and many more.

Y. Singh has done it all in the cricketing world. He is famously known for hitting 6 sixes in an over against England. Before retiring, Yuvraj had many records, including 17 international centuries.

Sadly, S. Warne passed away earlier this year on 4 March. One of the greatest spin bowlers of all time, Warne took 708 wickets in 145 Test matches.

Warne was not just limited to a cricket pitch, he was quite a famous face for the Australian media. He made a cameo appearance on the Australian show “Kath & Kim.”  Warner worked closely with many brands – Messages On Hold, Advanced Hair and Victoria Bitter.

Having retired from the sport a long time ago, B. Lara was one of the key players in West Indies’ cricketing history. Lara played for the West Indies between 1990 and 2007 and also continued to play in domestic T20 leagues after that.

MRF is one of the main reasons why Lara made such a big fortune. The former West Indies batter was one of the biggest bat sponsors for the brand during his tenure with the team.

Hailed as one of the best all-rounders to ever play this game, J. Kallis was a pivotal player in changing the landscape of South Africa’s cricket.

In 2005, Kallis started the ‘Jacques Kallis Sponsorship Foundation’ where young cricket enthusiasts were trained to their maximum academic and sporting potential.

Apart from the foundation, Kallis made a lot of fortune by associating himself with some top brands like AHS, Slazenger, BuchuLife and Bona Dea Private Real Estate.

The former Indian captain, S. Ganguly was the most outspoken batsman that the nation had ever seen. During his playing days, ‘Dada’ scored 18,575 runs in ODIs and Test matches.

The Board President takes home an annual salary of ₹2 crores. Ganguly also charges hefty fees to appear in commercials. Recently he has appeared for Fortune Foods, Meesho, Lloyd and many other brands.

Australia has often produced some of the best cricket players. However, there was no one like R. Ponting, who changed the landscape of Australian cricket.

V. Kohli is arguably the most complete batsman of the modern era. Apart from his incredible on-pitch performances, Kohli is also known for his endorsement deals.

In recent years, Kohli was also declared to be one of the highest-paid athletes in the world. Kohli’s net worth catapulted when he signed a deal with Puma. Kohli became the first Indian sportsperson to sign a ₹109 Cr. endorsement deal with a single brand in 2017 when he inked a deal with Puma.

Currently, Kohli works with over a dozen brands that help him increase his net worth. Some of the notable brands are – Myntra, Puma, American Tourister, MRF and many more.

Apart from all the earnings from the BCCI, ‘Thala’ earns with his clever off-pitch investments.

Dhoni owns many sports teams – the Ranchi Rays, a hockey team based in Ranchi, and the Chennai-based football club Chennaiyin FC which plays in the Indian Super League. Furthermore, he has his own production company called MSD Entertainment.

S. Tendulkar is a ‘once-in-a-lifetime’ player. A cricketing genius who changed the world with a bat in his hand. ‘The Master Blaster’ retired after scoring 100 centuries in international matches, the only player to do this.

Reportedly, the former Indian captain was the first cricketer to sign a deal worth ₹998 Cr. with MRF in 2001. The World Cup centurion also made a lot of fortune via multiple endorsements with the likes of Boost, Pepsi, Sunfeast and VISA in the past.

These are the top 10 richest cricketers on the planet. These cricket legends proved that they were clever on and off the pitch. There have been many instances in the sports industry where certain players go broke years after their retirement, but not these athletes.