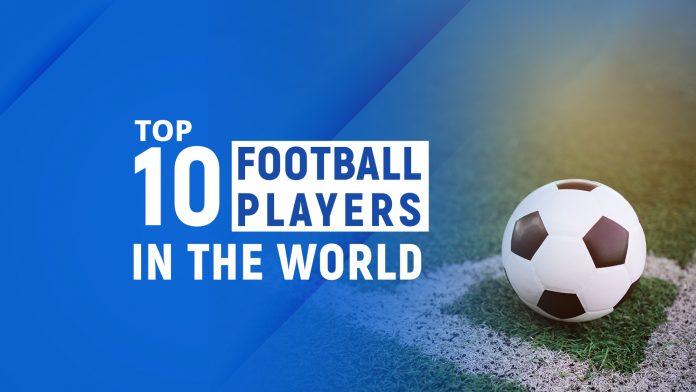 On number 10 we have Manchester City’s Ederson. The Brazilian signed for the Cityzens back in 2017 from S.L. Benfica for $42 million, a then record transfer fee for a goalkeeper. The 6 ft 2 in Brazilian is a brilliant shot-stopper with amazing reflexes, but is mainly known for his passing ability which is extremely rare for a goalkeeper.

At club level, Ederson has won 11 major honours with Manchester City including 4  Premier League titles and at personal level has won the Premier League Golden Glove for 3 consecutive seasons from 2019 to 2022.

Next on our list is F.C. Barcelona’s latest number 9, R. Lewandowski. One of the most decorated strikers of the current generation, Lewandowski is a goal poacher of the highest order. Popularly known as ‘Lewangoalski’ among his former Bayern teammates, the Polish striker once scored 5 goals in 9 minutes in a Bundesliga match against Wolfsburg and created several Guinness records.

With 540 goals to his name in 747 games, Lewandowski has won numerous accolades at personal and club level including the UEFA Champions League in 2019-20.

This list would be incomplete without the most expensive football player of all time, Neymar Junior. The 30-year old winger from Brazil is widely regarded as one of the best players of all time and has achieved the feat of scoring at least 100 goals for 3 different clubs. Currently part of the PSG super-team, the Brazilian is known for fancy sambasque dribbling, playmaking and goal-scoring.

Neymar has won almost everything at club and international level including UCL and Copa America. Regarded as the king of controversies, Neymar (74) is the 2nd highest goal-scorer for the Seleção only behind the legendary Pele (77) on the list.

The Egyptian king sits at number 7 in our rankings. The 30 year-old forward is regarded as one of the best players to come from the African continent. After a poor spell at Chelsea, Salah made a name for himself at A.S. Roma in Serie A before signing for Liverpool in 2017 for $48 million. Salah broke the Premier League goal-scoring record in his first season with Liverpool.

In the 2018-19 season, Salah brought the European glory back to the streets of Merseyside and helped Liverpool win their first-ever Premier League title in the next season. Salah recently signed a contract extension with the Merseyside outfit which would keep him at the club until 2025.

Next entrant in our list is Mo Salah’s club teammate V. van Dijk. Currently regarded as the best centre back in the world, the Dutch defender became the world’s most expensive defender when he signed for Liverpool from Southampton F.C. in January 2018. A key part of Liverpool’s golden generation, van Dijk won the UEFA Player of the Year award in 2019 and finished runner-up behind Leo Messi in Ballon d’Or 2019. Captain of his country’s football team, van Dijk is often called a Rolls Royce defender due this aura while defending in the toughest situations.

Arguably the greatest footballer of all time, Messi is fifth in our rankings. The 35-year old Argentine has literally won every form of silverware at club and international level except the World Cup. The left-footed wizard has the highest number of G/A in football history which includes 782 goals and 331 assists.

Despite a poor first half in the 2021-22 season, Messi scored 6 times and assisted on 14 occasions to help PSG reclaim the Ligue 1 title. Messi has won the coveted Ballon d’Or a record number of 7 times including 4 successive ones from 2009 to 2013 with F.C. Barcelona.

The youngest member of the iconic PSG trio, Mbappe is next on our list. ‘The Prodigy from Paris’ is already a fan favourite in his homeland after helping France win the 2018 FIFA World Cup. Mbappe scored 4 goals in the 2018 World Cup including the winner in the finals and took home the Best Young Player of the Tournament award.

Mbappe is the second most expensive player of all time after his PSG teammate Neymar. Former Arsenal coach Wenger dubbed Mbappe as the second-coming of the legendary T. Henry. At just 23 years of age, he has already scored 203 goals in his career and is destined for greatness.

As we reach the climax, J. Kimmich is at number 3 in our rankings. The German footballer is one of the most versatile players in the world and can easily slot in at right back as well as central midfield. Often regarded as the successor of the great P. Lahm, the Bayern player is known for his positioning, passing and crossing.

Kimmich is the heartbeat of his club team as well as national team and keeps the game ticking with his smart and efficient passing.  He has been an  important cog in the F.C. Bayern side since 2015 and has won 7 consecutive Bundesliga titles along with the UEFA Champions League in the 2019-20 season.

The French forward sits at number 2 in our rankings. Benzema currently is the most complete number 9 in the world and has helped Real Madrid win the UEFA Champions League for the first time since the departure of superstar C. Ronaldo. Benzema scored consecutive hat-tricks against PSG and Chelsea in one of the most impressive UCL knockout runs in modern football history.

He is currently the favourite to win the Ballon d’Or for the first time after a double-winning campaign with Real Madrid. Benzema recently overtook Raúl to become 2nd highest goal-scorer in the history of Real Madrid with 325 goals and is also the leading assist provider with 103 assists in 608 appearances for the club.

Man City’s Belgian midfielder sits at the number 1 spot in our rankings. Often referred as the ‘complete player’ by top managers and pundits, de Bruyne is one of the most intelligent footballers and has the eye for defence breaking passes. The Belgian is one of the rare ambidextrous footballers and is lethal from dead ball situations.

De Bruyne has won numerous accolades with Manchester City at club level and finished 3rd with Belgium in the 2018 World Cup. In the 2019-20 season, de Bruyne tied T. Henry’s record for most assists in a single Premier League season and won the Player of the Season as well. He is the only Belgian footballer to win Player of the Season in Germany and England. The Belgian midfielder is currently eying a 5th Premier League trophy with Man City.

These are your top 10 football players in the world. When you create fantasy teams on MyTeam11, you can add them to your team due to their brilliant stats. These players are also the top ranked fantasy players on MyTeam11. So don’t forget to create your teams on MyTeam11 and get a chance to win big. Keep playing, keep winning!