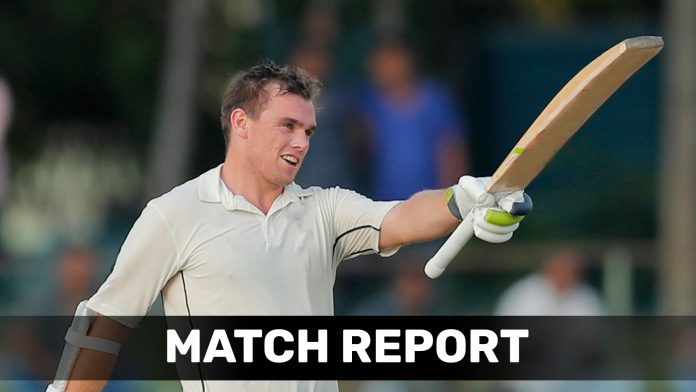 After going 1-0 in the two match series, Sri Lanka were the clear favorites in the second Test Match played at Colombo. But, Kane Williamson led side showcased exceptional performance in the second Test to defeat the Lankan lions by innings and 65 runs.

Sri Lankan skipper, Dimuth Karunaratne won the toss and decided to bat first. Dhananjaya de Silva played a remarkable innings (109 runs) for the team that helped them to reach the total of 244 in the first innings. Karunaratne also played a steady innings of 65 runs in the top order.

In response to Sri Lanka’s first innings total, at one stage Kane Williamson led side was tumbled to 126/4 but Tom Latham’s and BJ Watling 143 runs partnership took the game far away from the home team. Both the batsmen scored brilliant centuries that helped New Zealand to reach 431 runs in the first innings and take hefty lead of 187 runs before Williamson declared the innings. Tom Latham scored 154 runs while wicket-keeper batsman, BJ Watling looked good for his unbeaten 105 runs.

Sri Lankan batsmen came to bat in the second innings with huge responsibility on their shoulders. But, New Zealand bowlers came out with a special plan against the hosts as the visitors shattered the Sri Lankan top order with their impressive bowling. At one stage, the Lankan lions were at 32/5. Although Niroshan Dickwella along with Dimuth Karunaratne showed good effort to draw the match but at the end it was New Zealand’s bowlers that kept their calm under pressure and stopped Sri Lanka to 122 in their second innings.

Player of the series