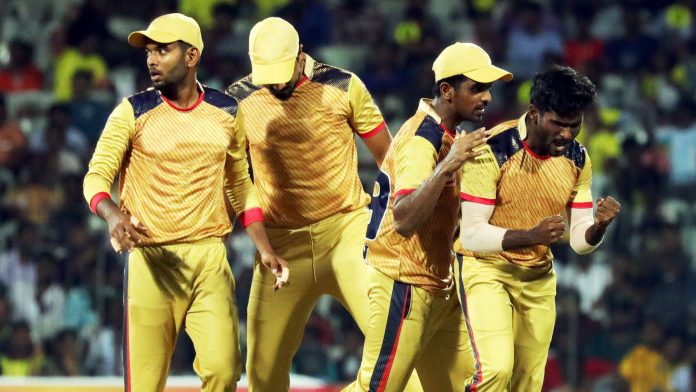 G Periyaswamy’s 5/15 coupled with a quickfire 44 off 33 from Sasidev helped Chepauk Super Gillies (CSG) to clinch their second Tamil Nadu Premier League title at M.A Chidambaram Stadium in Chennai. Dindigul Dragons, who finished the league stages as table-toppers experienced some hiccups in the knockout stages – losing the first qualifier. However, they came back strongly in the eliminators to play the rival CSG for the third time in the fourth season.

Chepauk Stadium once again experienced a low-scoring encounter with runs hard to come by. It was a dull wicket and batting second was certainly going to be a tough task – which even happened. Kaushik Gandhi, skipper of CSG called it right and asked the opposition to have a bowl.

Ganga Sridhar Raju and Gopinath started off the proceeding for CSG but their partnership didn’t last long with the latter experiencing golden duck. Kaushik Gandhi replaced Gopinath to the wicket and tried to stitch a partnership for the first wicket. However, the duo managed to add mere 17 runs before Ganga was sent back to the pavilion by Ramalingram Rohit.

The wickets kept tumbling for the home side and sooner CSG saw themselves at 55 for the loss of five wickets in the first eleven overs. The game was well poised in favor of the visitors before Sasidev played a heroic knock off 44 runs. His innings along with contributions from lower down the order helped Super Gillies to finish at 126 runs in their quota of 20 overs.

After the end of the first innings, Dindigul Dragons was certainly the happier camp, fancying their chances of getting their hands on the coveted trophy. However, the team was off to a horrific start, losing three wickets for mere four runs on the board. Sumant Jain along with Mohan Abhinav tried to stitch a partnership in the middle and repair Dindigul innings. The duo registered a partnership of 49 runs before Abhinav threw his wicket away.

The lower middle-order strung crucial partnerships to help Dragons take the game deep. With 15 needed off the final over and M Mohammaed still at the crease – it looked within the reach of Dindigul Dragons. But G Periyaswamy, who has been CSG’s star sensation this season had different plans and scalped three wickets in the final over to help his side upstage Dragons by 12 runs. In the end, 126 turned out to be too much for Dindigul Dragons as Chepauk unearthed an absolute star in Periyaswamy.