“The Wall,” Rahul Dravid inducted in the ICC Hall of Fame 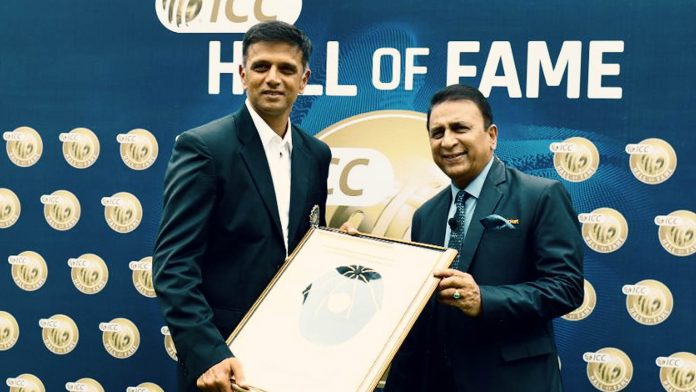 The International Cricket Council on Thursday made an overwhelming announcement that made every true Indian cricket lover feel full of pride. Moments before the beginning of the final match of the 5-match-ODI series between India and West Indies in Thiruvananthapuram, ICC Board announced the inclusion of Rahul Dravid in the ICC Hall of Fame.

Rahul Dravid, profusely known as “The Wall” becomes the 5th Indian to make it to the honorable list of great achievers in the world of cricket. Throughout his career, Dravid was known for his hard-hitting performance as a batsman following which he earned the title of “The Wall.”

Rahul Dravid was honored by veteran cricket player Sunil Gavaskar who gave him the framed cap marking his inclusion in the ICC Hall of Fame, a video of which was tweeted on the official Twitter account of BCCI by the authorities.

Earlier this year, in the month of July, the ICC had announced three players as the recent inclusion to the list of all-time great cricketers across generations for their over the mark contributions to their respective teams and the world of cricket. The recent inclusion as per the announcement were Rahul Dravid, former Australian Cricketer Ricky Ponting and retired England women wicketkeeper-batter Claire Taylor.

Prior Rahul Dravid, four Indian players have been inducted in the ICC Hall of Fame including Sunil Gavaskar, Kapil Dev, Anil Kumble, and Bishan Singh Bedi.

On the work front, Rahul Dravid in presently the coach of India U-19 and India-A. In his 18 year-long cricket career, Dravid had scored 13,288 runs in 164 Tests hitting a total of 36 centuries and talking about his ODI career he has aggregated a total of 10,889 runs in 344 ODIs with 12 centuries. Dravid was awarded with the title ICC Cricketer of the Year in 2004 and ICC Test Player of the Year in the same year for his robust contributions.

We now look forward to see which Indian player makes it to the ICC Hall of Fame for their contributions to the cricket world. Till then keep watching this space for more sports updates.

Share
Facebook
Twitter
Previous articleIND vs WI: Men in Blue beat Windies by 9 wickets to haul 3-1 Series Win
Next articleHappy Birthday Virat Kohli: A Look Back at the legend’s Journey from a Delhi Boy to “King”