The Revival of Punjab and their Winning Sunshine in 2nd Half 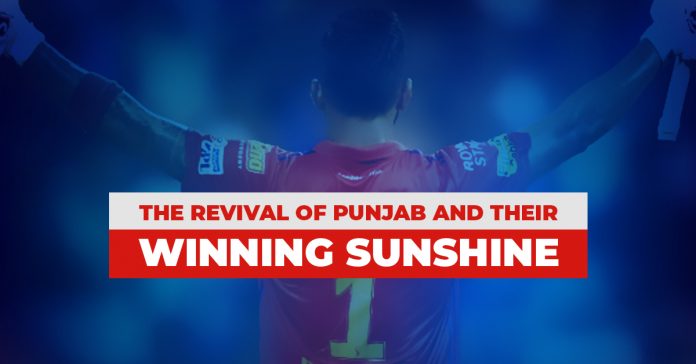 In Indian T20 league, we had witnessed some epic turnaround in the history of the tournament. Punjab is just sitting on the same boat to change their fortune to crack the playoffs code. Chennai and Mumbai managed to pull off the great turn arounds in 2010 and 2015 respectively, despite a poor first half. They woke up and emerged victorious with a title.

Punjab’s start in the tournament portrays their luck as they lost the game to Delhi when they required just one off 3 balls. In Sharjah, Tewatia snatched the victory from the jaws of the defeat. Against Kolkata, the middle-order collapse gave them another heartbreak as Maxwell fell short of an inch to get 6 off the last ball. Punjab could have won these three matches but it’s a game of cricket and minor things change the outcome of the game. With losing 6 games out of 7, Punjab were placed at the bottom in the table.

The second half delivered a box of happiness in this festival season and they grabbed it with both hands. First, they made a double over Bangalore with a wonderful chase, guided by KL Rahul and Chris Gayle. Gayle scored a fine half-century in his first game of the season. Chahal tried to create a drama in final over but Pooran smashed a straight six to seal the game.

On Sunday last week, Punjab appeared in one of the finest game of the tournament history. Their luck in final over cheated them one more time and the match went into the super over. With conceding just 5 runs in super over, Bumrah put a final nail in the coffin but the script had some more drama. Shami bowled an exceptional over with pin-point yorkers and conceded just 5 runs to make it tie. In 2nd super-over, Chris Jordan was also magnificent, thanks to a great save from Mayank Agarwal. Gayle and Mayank did the rest of the job to add two more points in the game.

On Tuesday, Punjab added one more win to make it three out of three. The Pooran-show overshadowed Dhawan's unbeaten ton to charge Punjab to the middle in the table. Maxwell’s positive intent while chasing created a boost amongst shaky middle-order. The top-order is in terrific form and Pooran’s aggressive approach put Punjab slightly ahead in the remainder of the season. The death-bowling issue has been solved for Punjab. With Murugan Ashwin and Ravi Bishnoi, their spin is a winner, despite having Mujeeb in the backup.

The equation is clear for Punjab to script a comeback in 2020. They have four matches to play in the next two weeks and the best part is, their all opponents are their main rivals who are also aiming to crack the 4th spot. Punjab faces next Hyderabad, Kolkata, Rajasthan and Chennai. These four teams are battling with each other to take the 4th spot. If Punjab wins here, they have two things to gain – first, two vital points and second, the point-difference with their rivals. They don’t need to recheck their NRR if they overcome these sides. It’s a blessing and the opportunity both.

The team is boosted and the confidence is high. Will they win at least 3 out of four or collapse in the pressure? Remember, the T20 format can surprise you and Punjab has a lot to offer in the remainder of the season.