The Leader, the Successor: A look back at India’s Most Capable Captains 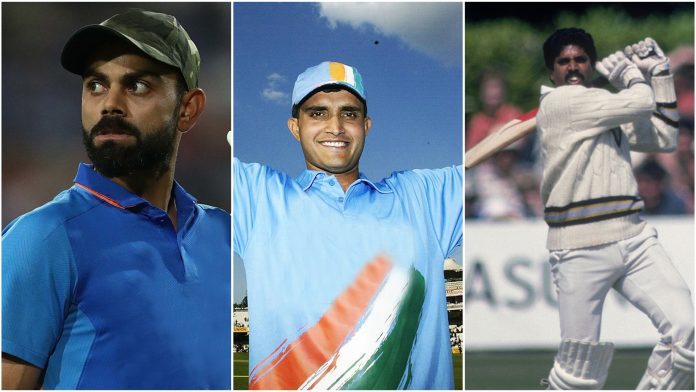 Somebody has rightly said that a leader is someone who knows the way, shows the way and goes all along the way to take his team to success. A leader’s job is to give confidence to the players and back them when nothing is going right for them. All the players who got the opportunity to lead the Indian team have done an excellent job in making the team win matches.

Let’s have a look at some of them whose captaincy has strengthened the Indian national team and improved its status in the World.

Kapil Dev: Captain who brought a revolution in Indian cricket

Under the captaincy of the legend, Kapil Dev, Indian team lifted its first World Cup trophy in the year 1983. Kapil Dev lifted the World Cup trophy on the Lord's balcony after defeating West Indies in the grand finale was the start of a revolution in the Indian cricket.

He was the only captain who contributed to the team with both bat and ball. With the ball, Kapil Dev was known for his brilliant ability to bowl out-swingers and as a batsman, he had the potential to shift the momentum any time.

Former Indian skipper, Kapil was inducted into the Legends Club 'Hall of Fame' in the presence of former India captains Ajit Wadekar, Sunil Gavaskar and Nari Contractor at the Cricket Club of India.

“Kapil Dev is not just a once-in-generation player but a once-in-a-century cricketer just like Sir Don Bradman and Sachin Tendulkar.”- Sunil Gavaskar

Sourav Ganguly: The captain who brought enthusiasm in the players to perform outside

“The best way to get away from a crisis and yet hold on the reins without performance is to find a godfather who would save you at crisis and fool the entire world. This is how it has worked for me.”- Sourav Ganguly

Whenever Sourav Ganguly’s captaincy is being talked about, the first thing which strikes the mind of almost all Indian fans is a shirtless man shouting enthusiastically at the Lord's balcony.

The left-hander was always known for his aggressive behavior on the field, and as a captain, his dynamic nature has helped the Indian team to stand tall and engrave their names in the golden books of the history. He is the one who developed a spark and gave confidence to players to win in foreign conditions.

The veteran Indian player, Ganguly played an instrumental role in making of players like Yuvraj Singh, Virendra Sehwag, and Harbhajan Singh by backing them in tough times. He gave ample opportunities to the players for showcasing their skills, and for this, he had even fought with the selectors.

Although India lost to Australia in the 2003 World Cup final, due to his sharp vision, India started to gain the confidence to showcase their best performances in overseas condition.

“When you see an Indian side with Ganguly in the line-up, you know its game on. You don’t have to like or dislike him; you have to respect him”- Steve Waugh

Undoubtedly, MS Dhoni is regarded as one of the most successful captains of India across all the formats. Former Indian skipper, MS Dhoni holds the record of winning major ICC tournaments as a skipper like the T20 World Cup, the 50 over World Cup and Champions trophy. It was under his captaincy when India became the number one test team in the World for the first time.

Known to be calm in even tense situations, he is the only captain other than Kapil Dev to win an ICC tournament outside sub-continent.

Other than ICC events, he holds numerous captaincy records like the most wins by an Indian captain in all formats of the game. In 2013 under his captaincy, the Indian team became the first team in more than 40 years to whitewash Australia in test series. His decision-making abilities and presence of mind were the main prospects of his captaincy. He was always one step ahead of the opposition; he knows when to use players and how to get best from his players.

The most significant quality that Dhoni possess is that his reactions were always the same in both victory and defeat. He might feel pressure within himself, but never displayed it in front of the team.

MS Dhoni decided to give Rohit Sharma a chance to open the innings, and today Rohit Sharma’s stats say about him. Since 2013, the day from when he started to open for the Indian team, his batting average has increased day by day. With three double centuries as an opener, Rohit today is the most destructive opening batsman of One-Day Internationals.

He had that ability to take right decisions at right times and always tried to get the best from his troops.

“MS Dhoni is the greatest captain of our country; his record is the proof of that”- Sourav Ganguly

Virat Kohli: The captain, who is known for his intensity and aggression on the field.

“Irrespective of whether you have a talent or not, one has to work hard because there is no substitute for            Hard Work”-Virat Kohli

The Greatest batsman of the present era, Virat Kohli has achieved a lot in his short Captaincy tenure till now. Also known as the Run Machine, he always sets an example for other players. After he has been handed the Indian team captaincy, Kohli’s batting graph has gone upwards.

As a Captain, he always enters the field with an attacking mindset and wants his players to fight for the win. To achieve success, he puts extra pressure and demands the same aggressiveness and intensity that he possesses from his players on the field. This is the only reason that India defeated the Australian team in Australia for the first time.

Apart from this, Virat Kohli has shown reasonable confidence in Kuldeep Yadav and Yuzvendra Chahal, both the spinners have been instrumental in India’s success since one year.

His captaincy style shows his passion for sports. He is one who wants to think and act beyond the limits and give confidence to young players.

"I love watching Virat Kohli bat. He looks to me like an individual of my own heart. I love his aggression and serious passion that I used to have. He reminds me of myself." – Viv Richards

At last, we can clearly say that Kapil Dev, Sourav Ganguly, MS Dhoni, and Virat Kohli have done wonders to Indian cricket and improved the status of Indian cricket in the World.

Follow MyTeam11 for more updates and information about the latest Sports Stuff.