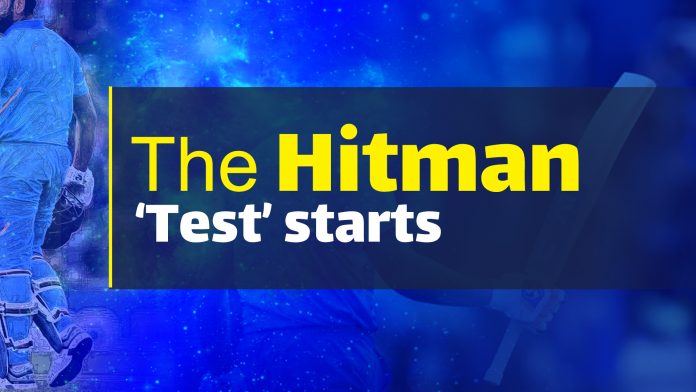 Amid all the speculations going around regarding Rohit Sharma’s Test career finally put to rest as the selectors give him chance to open the innings. Indian selectors axed struggling opener, KL Rahul and gave Rohit Sharma an opportunity to rejuvenate his red-ball cricket career. In the upcoming Test series against South Africa, the Hitman will be seen opening the innings with Mayank Agarwal.

The limited over stalwart will be aiming for a big run this time as a good performance here will strengthen his place in Indian Test team. Before this, cricket pundits and fans gave the same suggestion. Former Indian skipper, Sourav Ganguly was one of them, who after Rohit Sharma’s brilliant run in the World Cup 2019 felt Rohit should partner Mayank at the top of the order in West Indies vs India Test series. Sharma himself once said, “I am ready to open the innings in Test if the management wants it from me.”

The aggressive batsman has proved himself various times, at times, people started raising questions about his lethargic approach; some said he got ample opportunities. Because of failing consistently in the middle-order, even the one-day career of the 32-year-old right-handed batsman was at stake at one time. But, it was from 2013 when he started giving answers to all with his bat. His tremendous transformation as an opener can be undoubtedly described as “The rebirth of a middle-order batsman as an opener.”

In 2014, he became the first player on the planet to score more than 250 runs in a single One-Day International match. He scored 264 against Sri Lanka at the Eden Gardens, Kolkata which is still the highest score in One-Day Internationals. Overall in 128 innings as an opener, the stylish right-handed batsman has scored 6587 runs with the help of 25 centuries and 32 half-centuries at an average of approximately 60. With his terrific performance as an opener since then, the player has blown up the “First impression is the last impression” theory.

Now the question that arises is Will Rohit Sharma repeat the same and solve the Indian Test team opening issue? There’s no doubt about Rohit’s potential and capabilities as a batsman, but the white ball and red-ball cricket are completely different. What has been figured out to be hitman’s biggest weakness is lack of patience and inability to handle outswingers.

Previously, a lot of time we have seen that he chases the ball going away from him, something that he needs to improve quickly if he has to make a mark as an opener in Test cricket. So, he has to work hard now to convert his strength into weakness. It has been six years now since he made debut in Test Internationals. Since 2013, the right-hand batsman has represented India in the longest format on 27 occasions and scored 1585 runs at an average of 39.6 which does not portray his potential and capabilities.

Moreover, in the recently concluded West Indies vs. India series, Rohit was in the 15-member squad but was not included in the playing XI. So, keeping all these things in mind, the upcoming Test series against South Africa will be the big Test for the limited over dynamic batsman, and he will be eyeing to get the most out of it. Prithvi Shaw will return in November while Gill is included in the 15-member squad so, these U-19 boys can well take charge. Seeing all this, this might be the last opportunity for Sharma to get along well.