The Four Greats of the current era 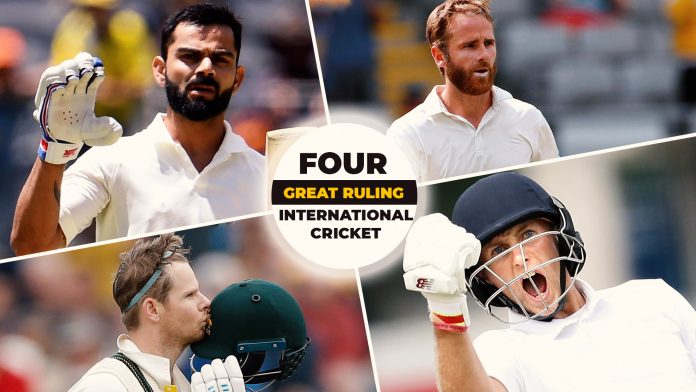 Who is Sachin Tendulkar? A teacher asked his students. Different answers came from the students; some said he is the only player to score 100 centuries in International cricket, others said he is first sports personality to get Bharat Ratna. But among these, a student asked, whenever the game of cricket is talked about why do we focus only on Sachin Tendulkar? The game has produced some other legends as well, like Rahul Dravid, Ricky Ponting, Jacque Kallis and many more.

Cricket World has generated some legends of the game whose records and achievements have been astonishing. Sachin Tendulkar, Jacque Kallis, Rahul Dravid, Ricky Ponting are the greats of their era who achieved some staggering milestone wherever they played, but at last that era has ended. Now, Virat Kohli, Steve Smith, Kane Williamson, and Joe Root are the present time greats who are ruling in International cricket. MyTeam11 brings you the four great batsman ruling in International cricket.

“I know I will regret this for the rest of my life. I'm gutted. I hope in time I can earn back respect and forgiveness”: Steve Smith words after that ball-tampering saga.

After that whole incident, most of us believed that Steve Smith would never be the same batsman again. But with two centuries followed by a double century in the ongoing Ashes series, Steve Smith breaks all the apprehensions. The 30-year-old Aussie batsman has shut the mouth of all spectators who made his joke after wearing Steve Smiths crying masks on the field.

Smith’s comeback series has been outstanding as the right-hand batsman surpassed King Kohli to grab the first rank in Test Internationals. Since his debut in 2010, the unorthodox batsman has played the 66 Test matches for Australia in which he scored 6577 runs at a healthy average of 63.24.  However, his 50 over format record is also impressive. In 118 games, he has grasped 3810 runs.

But, a double century in the fourth Ashes Test after a concussion injury which was Smith’s second comeback in the series has raised the respect of the cricketer in the entire cricket fraternity. He is most probably the best in business as far as the longest format of the game is concerned.

“Irrespective of you have talent or not; one has worked hard. Just being talented dosen’t mean anything, you can end up wasting it before you realize”: Virat Kohli

The quotes suit well to Indian batting icon, Virat Kohli who is in the headlines now for his phenomenal achievement after becoming the most successful Indian Test Captain. In his 48 matches as captain, Kohli has touched the victory line 28 times. Besides this his performance with the bat is also amazing. Virat first came into eyes when he decimated Sri Lanka veteran bowler, Lasith Malinga in 2012 commonwealth series in Hobart, Australia.

Since that miraculous inning where he scored 133*, Virat’s performance graph has seen a tremendous rise. The run-machine is just six centuries away to equal legendary Sachin Tendulkar’s one-day internationals record of 49 centuries. In 239 matches till now, Virat has gathered 11,520 runs with the help of 43 centuries and 54 half-centuries. In red-ball cricket, the 30-year-old batsman has 6,673 runs in 78 matches.

“There is no better feeling when you are up against the best”: Joe Root

Joe Root, who is leading England in the ongoing Ashes series is facing criticism for England’s lackluster performance. However, his performance with the bat over the years has been exceptional. He made his debut in Test cricket in 2012 against India, and in this match only, he gave a glimpse of his technique and class. He has been England’s go-to batsman in all formats of the game.

Since then, Joe Root has played 84 matches and scored 6894 runs with the help of 16 centuries. He played everywhere in the World and scored runs wherever he played. In 143 one-day internationals, he has scored 5853 runs.

Kane Williamson: The Man with ‘hunger’

After losing the World Cup 2019 final by boundary margin, Kane Williamson would be the angriest man of the planet. Despite that loss, Williamson was named as the ‘Man of the Tournament’ for his outstanding performance. The Kiwi skipper has got 578 runs at the recently concluded ICC Cricket World Cup 2019 that is more than any other captain at any World Cup before.

Undoubtedly, the GOAT of New Zealand, Kane Williamson’s stats in International cricket proves why he is considered as greatest player of this era. In 74 Test matches, he has scored 6163 runs at an average of approximately 52. While 149 one-day matches for his national side, the classy top-order batsman has 6162 runs in his account.