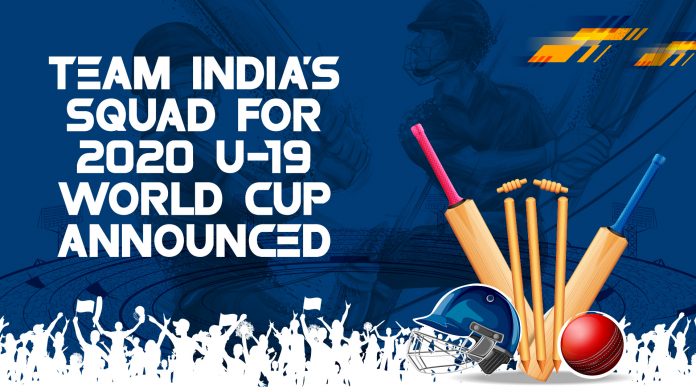 BCCI on Sunday announced India’s squad for the upcoming U-19 World Cup 2020, scheduled to happen in South Africa from 17 January to 9 February. 16 teams will take part in the 13th edition of the U-19 World Cup. All teams are divided in four groups. India is placed in Group A with New Zealand, Sri Lanka and Japan. The top two teams from each group will then qualify for the Super League stage. Defending Champions India are the most successful team having won four titles to date. They won in 2000, 2008, 2012 and in 2018, when they beat Australia by eight wickets in the final.

Uttar Pradesh batsman Priyam Garg will lead the young squad for the World Cup. He finished the 2018-19 Ranji Trophy as the second-highest run-scorer for UP, making 814 runs at an average of 67.83. The 19-year-old also featured in the Deodhar Trophy recently and scored 77 for India C in the final. He has played 15 List A matches and 11 T20s.

Another prominent name in the 15-member squad is Mumbai's 17-year-old Yashasvi Jaiswal, who was the highest run scorer for Mumbai in the recently concluded Vijay Hazare Trophy. Jaiswal made 564 runs at an average of 112.80 with three hundreds and a fifty. He also became the youngest player to smash a List A double-century.

Ahead of the World Cup, India U-19 will travel to South Africa for three One Day matches against South Africa U19 followed by a Quadrangular Series featuring South Africa U19, India U19, Zimbabwe U19 and New Zealand U19.