Teacher’s Day Special: Dronacharyas Behind the Arjun’s of Sports 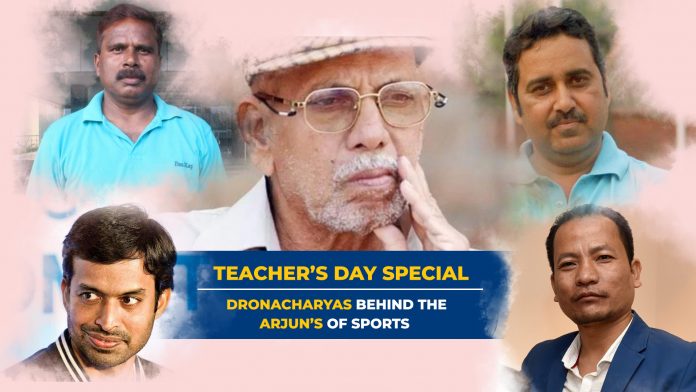 Often with love, care & affection, or at times with scolding & restrictions, teachers dedicate their lives to help us become the best version of ourselves. And sports stars are no exception. From realizing the potential to finding the right ways of training & then finally giving them wings to fly high in the sky of success, various coaches and trainers have played a crucial role in the lives of sports personalities.

On this occasion of Teacher’s Day when the efforts of teachers are widely celebrated, MyTeam11 takes a moment to bring you the stories of various Dronacharyas Behind the Arjun’s of Sports. Read on to know more.

Everyone is accustomed to the unique coaching style of Achrekar and the legend he has given to the game. The story of Sachin Tendulkar being coached by Achrekar is a book of innumerable pages that just recites how great of a coach he was. From hiding behind the trees to let Tendulkar play comfortably, imprinting his fingers on Tendulkar’s face for missing a match, to putting up a one-rupee coin on the stumps & challenging little Tendulkar not to get bowled for earning the coin, the coach has trodden every road required to carve out a diamond.

Achrekar had a sharp eye for unmatchable talent & his coaching center didn’t have any place for the undeserving. Time and again, Master Blaster remembers his coach and the efforts he had pulled-off to make him a star. Though not physically there with Sachin, Achrekar, his teachings, those one-rupee coins, and precious memories, still remain a significant part of Sachin’s life.

The next on the list is current bowling coach of Delhi’s Ranji team, Rajkumar Rao, who is more popular for being the childhood coach to team India’s one of the most talented, aggressive and energetic batsman, Virat Kohli. In the words of Sharma, Kohli had great potential but was a naughty kid and thus, required a lot of work. From endlessly munching on Biryani & Kebabs, to mimicking, dancing and singing amid the pieces of training, Virat has done all sort of mischievous.

But now looking back at the time, we can all say that his childhood coach has definitely done a marvelous job, gifting one of the best cricketers to the game. From getting out on several occasions while trying to play a flick shot, to mastering the stroke, Virat has come a long way, courtesy, the efforts, hard work & dedication from his coach.

A 19-year-old girl recently took the sports world by storm by bringing five golds in a span of 19 days. Bringing glory to India, Hima Das became the first Indian Women sprinter to bring a gold for the nation in a global event. Born without a silver-spoon, life never came easy for Assam based athlete, but after her terrific victory at the IAAF World Under 20 Championship 2018 in Finland, life has taken a 180-degree turn for the player. Her efforts, her will to win, there was someone else too who was as equally determined to see Das win a gold for the nation. The individual was none other than her Dronacharya, Nipon Das.

Nipon played a crucial role in Hima’s career, not just by mentoring her, but by being a support system. From convincing her family to let her stay in Guwahati, to bearing her stay expenses, to believing in her when she lost all the hopes. And, his beliefs, hard work, reaped in fruitful results in the form of Gold medals.

In a time when girls are on a winning spree, PV Sindhu became yet other women who brought India to the limelight in the World Championships. Pulling-off even the most difficult games with a smile on her face, PV Sindhu became the first Indian to win a Gold at the BWF World Championships. Her victory wasn’t just limited to the gold, but she earned a full set of medals with two bronze, two silvers and one gold. The victory was long-awaited for the player, and when it came, brought a lot of joys and hopes for the sports star.

Amid Sindhu’s success, there was one other name that was making headlines, Pullela Gopichand, the man who had put in blood & sweat for harvesting a magnificent talent from the ground-roots of India. Her consistency, & Gopichand’s belief in her that she can succeed at the Finals of BWF Championship, proved to be true. As Gopichand says, “If you are consistently in that space and knocking that door, it will break eventually," the door indeed broke down in front of Sindhu’s determination & Gopichand’s efforts.

Mary Kom and her success story is an inspiration to all the women out there. From keeping her boxing training sessions, a secret from her father, to shining like a star at the 2012 Olympics, the boxing champion has definitely come a long way. But the most inspiring factor on Mary Kom’s story is neither her struggle nor her success, but her husband, who played the role of her Dronacharya in her preparation for the Mahabharat.

K Onler Kom, the boxing legends husband stood by her side through thick and thin, motivated her to conquer her dreams, just like a guru does. And, that’s what has paid off.

You Guru can be your teacher, trainer, coach, parent, friend, life-partner of even your failure. The only thing that is required to learn & thrive is the will to learn, dedication & efforts. MyTeam11 salutes all the teachers who burn themselves to make someone’s career shine. A very Happy Teacher’s Day from MyTeam11 to all the gurus out there.