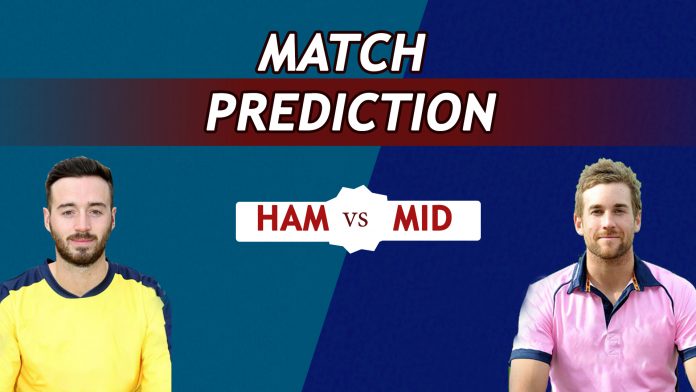 The Vitality T20 Blast league is getting more & more intense with each match. In another intensifier of the series, Hampshire & Middlesex from the South Group will be greeting each other. The match is expected to begin at 11:00 P.M. IST on 29th August 2019.

Hampshire played their last match against Essex which was tied at 139 runs between the two teams. The team has played 12 matches till now and with 4 wins, 5 losses, 1 tie, it stands at the 7th spot on the points table. The team needs to win all the remaining matches alongside hoping that the teams above them keep slipping down the points table, in order to qualify for the play-offs.

On the other hand, Middlesex faced a close defeat in their last match, where Sussex defeated them by 6 wickets. Sitting comfortably at the 5th spot on the points table, Middlesex expects to make it to the quarter-finals. Looking at the current season stats, the team has 6 wins and 5 losses, making up their point total as 13.

The match is scheduled to be held at The Rose Bowl, Southampton. Recognized to be a batting paradise, the ground is known for giving way to high scoring matches. Thus, going by the trend, another high scoring match is on the cards.

As per the reports coming from Southampton, the day will be quite sunny with no expected interruption of rain. This means that the fans can enjoy a full match.

Follow MyTeam11 to stay updated with the latest sports stuff and match predictions.