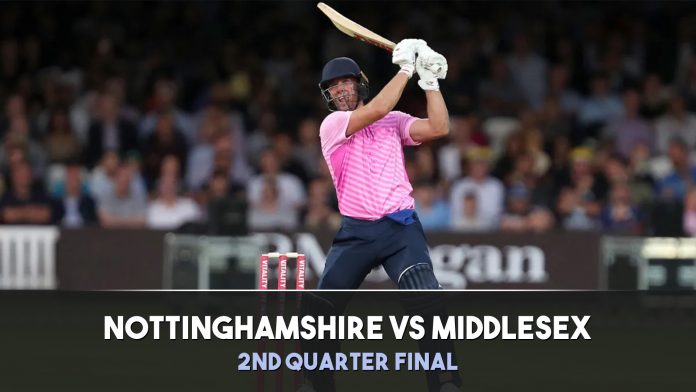 After all the thrilling action in the group stages of the Vitality T20 blast 2019, we are at the business end of the tournament. In the second quarter final, Daniel Christian led Nottinghamshire and Dawid Malan led Middlesex will face each other at Trent Bridge, Nottingham at September 5. The live action of the match will start tonight at 11:30 PM IST.

Both the teams have showcased exceptional performance in the league stage. Like league stage once again, the onus will be on the likes of AB de Villiers, Eoin Morgan, Alex Hales who are considered to be the dangerous batsmen of 20 over format and will be aiming to take their side to victory.

The pitch at Trent Bridge has favored bowlers a lot in the league. Plenty of big-hits and boundaries are on the menu. We think a total of 200 is going to be difficult to defend.

The weather forecast for Nottingham is excellent for the match with no chances of rain. So we should be able to get a full game of cricket in.