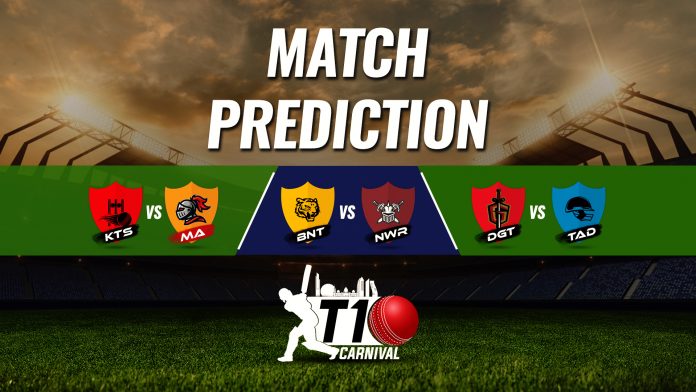 The T10 Carnival is all set to heat matters up, as it enters into the Super League Stage. The 20th November edition of the game will serve the fans with 3 back-to-back matches on the platter. The first match of the day will be played between Karnataka Tuskers and Maratha Arabians at 5:30 PM IST, followed by an encounter between Bangla Tigers and Northern Warriors at 7:15 PM IST and then, the day will wrap-up with a clash between Deccan Gladiators and Team Abu Dhabi at 9:30 PM IST.

Maratha Arabians, Bangla Tigers and Deccan Gladiators, none of the teams started the season on a positive note as they met hands with defeat in their inaugural game of the season. Whereas, Karnataka Tuskers and Norther Warriors started their campaign with a win. Team Abu Dhabi had to settle for a tie in their first game.

Currently, Deccan Gladiators are leaders of points table from their group with 2 wins from 3 games, followed by Bangla Tigers with 1win, 1 defeat and 1 tie. Karnataka Tuskers are the last with 1 win and 2 losses from 3 games. On the other hand, it Maratha Arabians who are leading the table from their group. Team Abu Dhabi and Northern Warriors occupy the 3rd and 4th spot respectively.

The game is scheduled to be played at the Sheikh Zayed Stadium, Abu Dhabi. With repetitive games being played at this venue, the pitch here has slowed down and hitting big scores might be a challenging task now.

The weather reports suggest the chances of rain hampering the game with the precipitation levels of 92-96%. The temperature will be around 23-25 degrees Celsius.