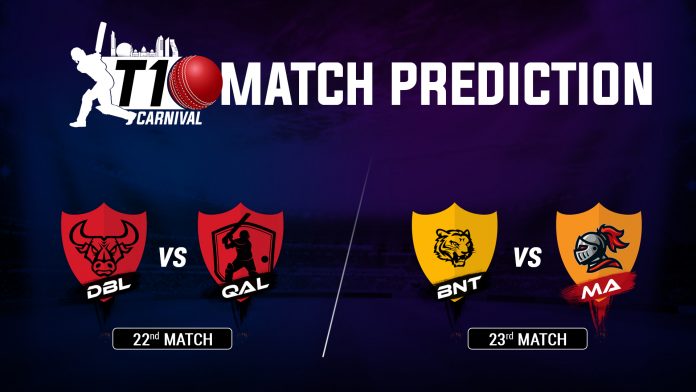 T10 carnival is moving at a fast pace as 21 matches are already done and dusted. The 22nd Match will be played between Delhi Bulls and Qalandars at 5:00 PM IST followed by the 23rd game between Bangla Tigers and Maratha Arabians at 7.15 PM IST at the Sheikh Zayed Stadium in Abu Dhabi.

Delhi Bulls started their campaign with a win but lost the second game against Karnataka Tuskers. Eoin Morgan has led the team from the front with his explosive batting and Perera too has contributed well so far. Bulls bowling will highly depend on the experienced pacers Zaheer Khan and David Wiley.

For Qalandars, Dawid Malan has been the star. The Englishman has scored 115 runs so far in 4 matches with a strike rate of 164. Chris Jordan has led the bowling attack well with his impressive death bowling.

Bangla Tigers are sitting on the second spot and will be looking for another win.  Andre Fletcher has been their top batter so far. Fletcher has scored 114 runs with the strike rate of over 200. Maratha Warriors, on the other hand, are well placed on the points table after an emphatic victory against Team Abu Dhabi.

Sun will shine throughout the day with 0% chance of rain. The temperature is expected to be between 22-26 degrees.

The pitches in Sheikh Zayed Stadium tends to favour the spinners. Batting first will be a good idea as chasing will be difficult in this track.