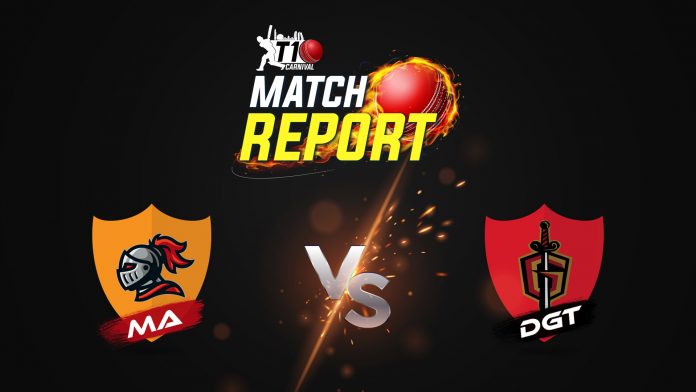 The 3rd season of T10 Carnival finally came to an end after a week of back-to-back matches full of entertainment, action and thrill. The final match played between Maratha Arabians, and Deccan Gladiators was a neck-to-neck encounter as both the teams tried hard to overpower the opponent and get away with the season trophy.

It was the first time that either of the teams entered the finale of the tournament, and the hunger to win was clearly visible in the game of both the teams. The game started with Maratha Arabians winning the toss and opting to field first. It was Mohammad Shahzad and Shane Watson who opened for Deccan Gladiators, but the Watson charm wasn’t long-lived as he was caught Najibullah on the second ball he faced.

Deccan Gladiators found it a tough task to stand strong on the field as the bowlers from Maratha Arabians destroyed Gladiators’ batting line-up. Every couple of overs, the fans witnessed fall of a wicket, as the opponent managed to restrict Deccan Gladiators at a score of 87 runs with a loss of 8 wickets at the end of first innings.

Also Read: INDIA BEAT BANGLADESH BY AN INNINGS AND 46 RUNS IN THEIR FIRST PINK-BALL TEST

Maratha Arabians’ stars were shining bright even after their star player Chris Lynn failed to hit big in the final game of the tournament. It was Chadwick Walton who led the Arabians towards the victory ways with his blistering innings of 51 runs off 26 balls. Maratha Arabians registered a comprehensive victory, managing to score 89 runs at a loss of 2 wickets in just 7.2 overs.

It was a good day for Maratha Arabians as they won their first-ever T10 Carnival Trophy, competing against one of the strongest teams of the season. Chadwick Walton was adjudged with the title of Player of the Match for his amazing performance in the final game whereas Chris Lynn was announced as the Player of the Series for his efforts throughout the season.