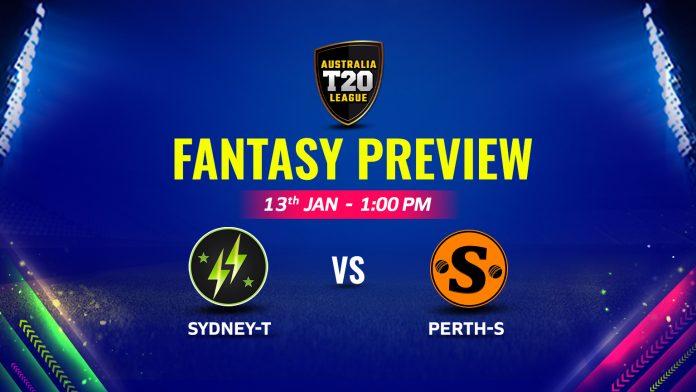 The 39th encounter of the Australia T20 League will see Sydney-T take on the reigning champions, Perth-S, at the Spotless Stadium in Sydney. As we gear up for this exciting match-up, let’s take a closer look at the fantasy preview and suggested fantasy XIs for the game.

The Sydney-T are currently sitting comfortably in fourth place on the league table, with 10 points earned from 5 wins in 9 matches played. Their recent performance includes a loss in the Sydney Derby against the Sydney-T, which broke their four-match winning streak. Sydney-T will look to regain their momentum as the tournament progresses and aim for a top-2 finish in the league.

The Perth-S, four-time champions of the BBL and reigning title holders, are once again proving to be a formidable force in the tournament. They have consistently dominated the competition across all three aspects of the game and currently sit at the summit of the league table with 14 points in 9 matches played. Their track record of success and this season’s performance make them a clear front-runner to qualify for the playoffs.

The match between Sydney-T and Perth-S will be played at the Spotless Stadium. The match is scheduled to start at 1:00 PM on 13th January 2022. Lineups for the match will be available at 12:30 PM on MyTeam11 app.

Unlike other venues such as The Gabba or The Adelaide Oval, the Spotless Stadium does not boast of bouncy tracks or batting-friendly pitches. Instead, the surface here is relatively slow and low-scoring, making it a challenging venue for batsmen.

According to the weather forecast, Sydney will experience sunny and moist conditions on Friday. The predicted high temperatures will be around 24 C with winds reaching speeds of 27 km/hr.

D Sams(Sydney-T): Sams has made a significant impact in the ongoing BBL season, having claimed 11 wickets to his name so far. While he has yet to make a notable contribution with the bat, he is known to be dangerous during the death overs, particularly. Sams is someone to keep an eye on against Perth.

J Behrendorff (Perth-S): Behrendorff is a name synonymous with success when it comes to the Thunder-Scorchers rivalry, having claimed an impressive 14 wickets against Sydney-T. He has also been making waves in the current BBL season, boasting 15 wickets to his name. Alongside fellow bowlers Richardson and Tye, Behrendorff forms a formidable attack for the Scorchers.