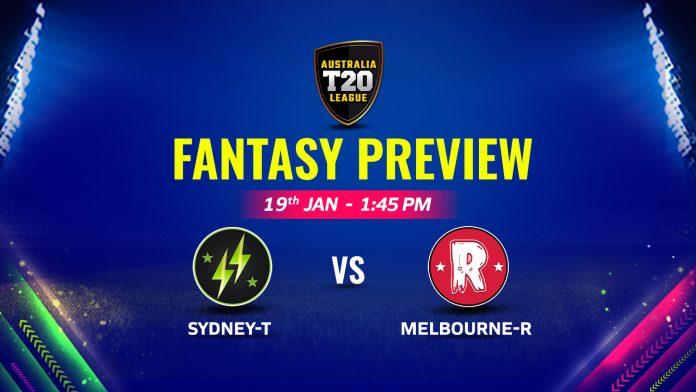 The upcoming contest between Sydney-T and Melbourne-R is the 47th match of the Australia T20 League which will take place at the Manuka Oval in Canberra. This will be the 17th meeting between these teams, with Melbourne-R holding the upper hand with 10 wins compared to Sydney-T’s 6. As we prepare for this highly anticipated match, let’s take a closer look at the fantasy preview and suggested fantasy XIs for the game.

Sydney-T, despite having 5 wins in 11 matches, currently sits in 6th place on the league table with 10 points. Unfortunately, the team has been struggling as of late, currently on a three game losing streak. They will need to turn things around if they hope to secure a playoff spot.

On the other hand, Melbourne-R has established themselves as a strong contender for the playoffs, currently sitting in 3rd place on the league table with 12 points in 11 matches. The team is fairly balanced from top to bottom and haven’t slacked in the absence of star all-rounder A. Russell.

The match between Sydney-T and Melbourne-R will be played at the Manuka Oval. The match is scheduled to start at 1:45 PM on 19th January 2023. Lineups for the match will be available at 1:15 PM on MyTeam11 app.

The Manuka Oval pitch is well-rounded and supports both batsmen and bowlers. Fast bowlers tend to have an influence in the early stages of the match, extracting movement with the new ball. The outfield is also notably swift, contributing to a high scoring rate.

The weather forecast for the match predicts overcast conditions, with a high of 19°C and winds gusting at 23 km/hr. These conditions promise to make for an exciting game of cricket.

O Davies (Sydney-T): The top run-getter for the Sydney-T, Davies has been a key player for them in this season. He has accumulated an impressive 323 runs in the tournament, with a striking 142 strike rate. His consistent performances have been a major factor in the team’s success thus far.

A Finch (Melbourne-R): A seasoned batsman, Finch has established himself as a dominant force in the Thunder-Renegades rivalry. He holds the record for most runs scored in the rivalry with a staggering 483 runs. Currently in exceptional form, Finch is the leading run-scorer for the Renegades with 257 runs. His presence on the field is sure to make an impact on the game.