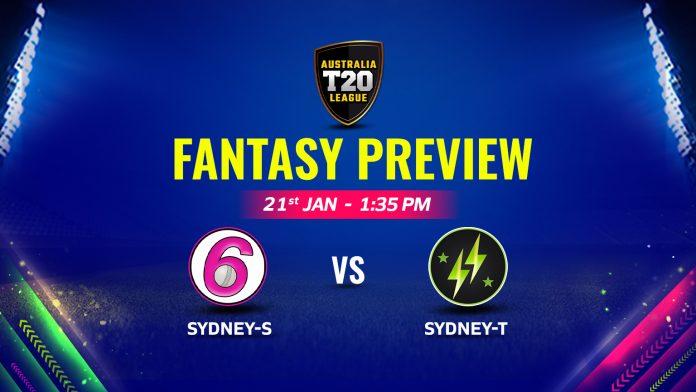 As the league nears its conclusion with Sydney-S vs Sydney-T, the Thunder currently sit in fourth place on the points table, having secured six wins and an equal number of losses. Sydey-S, on the other hand, is second in the standings, having amassed 8 victories and 3 defeats, accumulating a total of 17 points. Sydney-S is currently on a winning streak and will look to make it five consecutive victories in this match.

In the recent match against Adelaide-S, Sydney-S reigned supreme and ascended to the summit of the league standings for a brief moment. The team amassed an imposing 203/5, led by a spectacular century from Steve Smith. Patterson and Silk also made noteworthy contributions to the team’s score.

Apart from their initial two matches of this season, the Sixers have been in formidable form and will be looking to continue their dominance in the upcoming match against their city rivals.

Thunder delivered a commanding performance, successfully chasing down the Renegades’ score to break their winless streak and move up to fourth place on the points table with 12 points.

Gilkes capitalised on the Renegades’ bowling, contributing 87 runs to an unbroken third-wicket partnership with Ross, leading the Thunder to a victorious finish. The Thunder’s bowlers, who were exceptionally disciplined throughout the match, set the stage for the win and it was only a late charge from Will Sutherland that helped the Melbourne-R to a respectable score.

The match between Sydney-S and Sydney-S will be played at the Sydney Cricket Ground. The match is scheduled to start at 1:35 PM on 21st January 2023. Lineups for the match will be available at 1:05 PM on MyTeam11 app.

S. Abbott (Sydney-S): Abbot has taken 20 wickets in the series so far. With his bowling prowess, the Sydney-S team has reaped a lot of benefits from him. As the tournament intensifies, Abbott will surely become the difference-maker.

O. Davies (Sydney-T): The top run-getter for the Sydney-T, Davies has been a key player for them this season. He has accumulated an impressive 323 runs in the tournament, with a striking 142 strike rate. His consistent performances have been a major factor in the team’s success thus far.