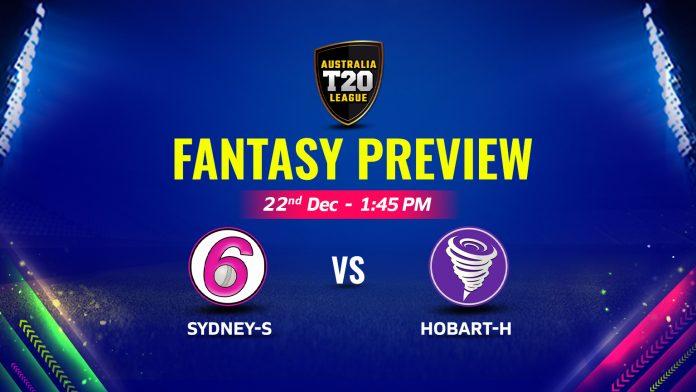 The 11th match of the Australia T20 League will be played between Sydney-S and Hobart-H at the Sydney Cricket Ground. The two teams have previously faced each other 15 times, with Hobart-H emerging victorious on 9 occasions while Sydney-S triumphed 6 times. Let’s look at the fantasy preview for the match and read till the end to see suggested fantasy XIs.

The franchise from Sydney sits at the bottom of the table after suffering consecutive losses against Adelaide-S and Perth-S respectively. The runners-up from the last edition would be looking to bounce back to overcome this tough start early on in the season.

Sydney-S have a deep batting lineup featuring the likes of wicket-keeper batsman J. Philippe, skipper M. Henriques and all-rounder D. Christian. S. Abbott, the most successful pacer in the history of Australia T20 League, will lead the bowling attack for Sydney-S.

Hobart sits in the middle of the pack with a win and a loss in their opening two fixtures. The team from Tasmania lost their opening match against Melbourne-S but won a nail-biting encounter against defending champions Perth-S.

The squad of Hobart-H boasts some of the biggest hitters in the Australia T20 League. Veteran D. Short, skipper M. Wade and six-hitting machine T. David can dismantle any bowling attack in a space of few overs. Pacer R. Meredith and leg-spinner S. Khan have the onus to carry the bowling attack on their shoulders.

The match between Sydney-S and Hobart-H will be played at the Sydney Cricket Ground (SCG). The match is scheduled to start at 1:45 PM on 22nd December 2022.

Sydney Cricket Ground is known to be a high-scoring ground with a balanced wicket. The pitch generally offers a good balance between bat and ball, with spinners finding more assistance from the surface than the seamers.

As for the weather conditions in Adelaide, they are expected to be fairly pleasant with temperatures around 22°C, a relatively low chance of precipitation and a high humidity level of 64%. The wind is also not expected to be too strong, with speeds of around 27 km/h forecast. Overall, it should be a good day for cricket in Sydney.

D. Christian (Sydney-S): The veteran all-rounder is known for his ability as a dependable batsman, economical medium pacer and capable fielder. Christian has shown his versatility over the years in Australia T20 League as he has scored 2023 runs and claimed 90 wickets in 123 matches.

S. Khan (Hobart-H): The franchise from Hobart signed the vice-captain of the Pakistan Cricket Team for the 12th instalment of the Australia T20 League. Khan had a brilliant World T20 Cup with Pakistan and led the team to the finals. He has the capacity to contribute in all 3 facets of the game and will be a key figure in the Hobart dressing room.