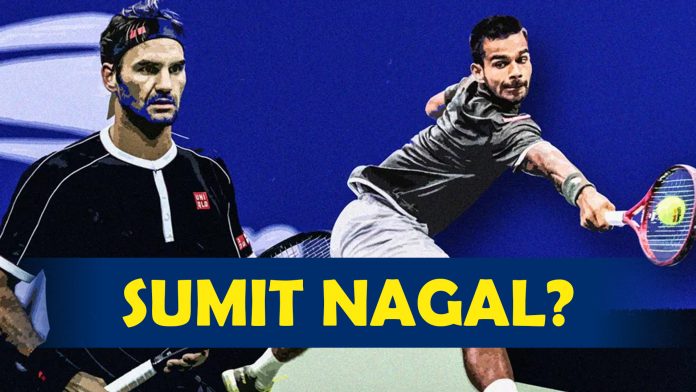 22. An age where 90 per cent of us were still figuring out as what we wish to achieve in our lives or were in process of achieving. Individuals who are able to work on the process eventually manage to clinch the desired results – and such has been the case which is been observed over generations.

How about I tell you that at the same age, Indian tennis player, Sumit Nagal earned a Grand Slam debut for himself? – Coming from a country where ‘tennis’ isn’t the favourite sport and favourite isn’t the word attached – it’s certainly a legendary moment for the youngsters and for us as citizens.

The 22-year-old born in Jhajjar in Haryana would have felt he was living in a dream as he beat the 20-time Grand Slam champion 6-4 in the opening set of the match.

Although Federer soon bounced back and righted the course, winning the next three sets to progress to the second round of the US Open for the 19th time in a row, Nagal put up a spirited performance throughout and made the whole of India sit up and take notice of his talent in the 2 hours and 30 minutes that he went up against his “god”.

In the course, Nagal also became only the fifth Indian male player to feature in a Grand Slam singles main draw in this decade. He is currently ranked 190 in the world. Somdev Devvarman, Yuki Bhambri, Saketh Myneni and Prajnesh Gunneswaran are the only ones who played at singles Majors between 2010 and present.

Ahead of his first-round clash with Federer, Nagal had said, “It’s probably the best thing that could have happened. I was hoping I get to play Roger someday. He is God of tennis, so yeah I am looking forward to it.”

He has come a long way from his days of wandering on the sidelines of tournaments, hoping to get in. Born on August 16, 1997, he won the 2015 Wimbledon boys’ doubles title with his Vietnamese partner Lý Hoàng Nam, defeating pair of Reilly Opelka and Akira Santillan in the final. He became the sixth Indian player to win a junior Grand Slam title.

He made his Davis Cup debut for India in the 2016 World Group Playoff tie against Spain in New Delhi, but the next couple of years were not that great for the youngster.

He was dropped from the Indian Davis Cup squad in 2017 after reports came to surface that he missed a practice session in July 2016 at Chandigarh during the tie against Korea, citing a hangover.

But 2019 saw a turnaround in fortunes. Nagal came into the US Open qualifiers confident, backed by terrific results during the Clay court season. Consistent results on the Challenger Circuit meant that he broke into the top-200 for the first time in his career.

He had started the year outside the 350 brackets and had to overcome a difficult period, encountering injuries but came back strong.

India's Davis Cup captain Mahesh Bhupathi, who was first to spot Nagal's talent and took him under his wings to provide support, said the match against Federer was a career-defining moment for the 22-year-old, who grew up in West Delhi.

Nagal, who won his maiden Challenger title Bengaluru in 2017 could not build on that success. He had blamed the change in support staff for the poor results as he was knocked out of 16 tournaments at first round itself after the high of Bengaluru Open title.

But later he began to train with Serbian coach Milos Galecic at Paine in Germany and results have started to show. Somdev – one of the best counter punchers India has produced – had also trained with Milos.