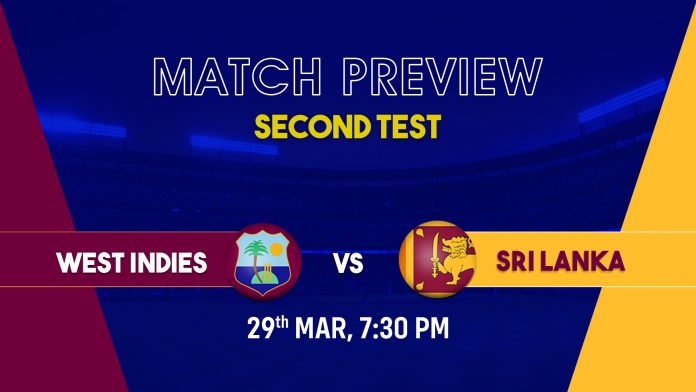 Sri Lanka and West Indies lock horns in the second Test to win the series. Both sides played out a competitive draw in the first Test.

West Indies and Sri Lanka appeared in a thrilling Test at Antigua. The first Test match was full of excitement and each day, we saw a turnaround. Holder and Roach put West Indies on the driver’s seat after the first innings but Sri Lanka pulled off a comeback in 2nd innings with a fight from Thirimanne and debutant Pathum Nissanka’s hundred. West Indies came back hard on the final day to save the Test, courtesy of Bonner’s hundred and Mayers’ resilience. It was another Test of 2021 that went into the final hour of the fifth day.

Sri Lanka’s comeback provided a drama in the series and the second Test match will be a cracking one. Both sides have been eliminated from the WTC. West Indies will play their final Test in WTC 2019-21 and Sri Lanka will face Bangladesh at home to wind up their SWTC campaign. Visitors had too many positives from the first Test and if they could have batted very well in the first innings, the picture was perfect. Pathum Nissanka impressed in the domestic circuit with an average of 63 and he scored a ton in his debut match. Thirimanne’s form was a concern but he developed himself as a match-winner from the last two series. Niroshan Dickwella would look to end the wait for his maiden Test ton. He scored 17 half-centuries before in 77 innings but didn’t get a hundred. Sri Lanka’s fightback in the 2nd innings put them slightly ahead in this game. Lakmal bowled very well in the first game and his 5-wickets haul in the first innings didn’t concede a big lead. Dimuth Karunaratne is likely to pick the same XI for this fixture.

Meanwhile, West Indies won more sessions in the first Test. They were ahead in the game after the first two innings. Sri Lanka’s fightback delivered some scars but they managed to hold Lankan on the fifth day. Holder grabbed a 5-wicket haul and Bonner got a hundred in 4th innings were the key highlights for Windies. West Indies couldn’t avail the advantage of taking a 102-run lead. It happened after a long time, since West Indies failed to win a Test match despite getting 100 plus lead in the first innings. The positives from the previous Bangladesh tour helped Windies to better their team combination. Bonner and Mayers have boosted the middle-order. West Indies have been a good side at home and they would look to end their WTC campaign on a high note.

Antigua’s surface was an ideal track for the Test and the second match will also be played on the same track. The surface is good to bat and batting would be easier on the first two-three days. The morning sessions will be tested by pacers. Chasing in 4th innings is not an ideal call.