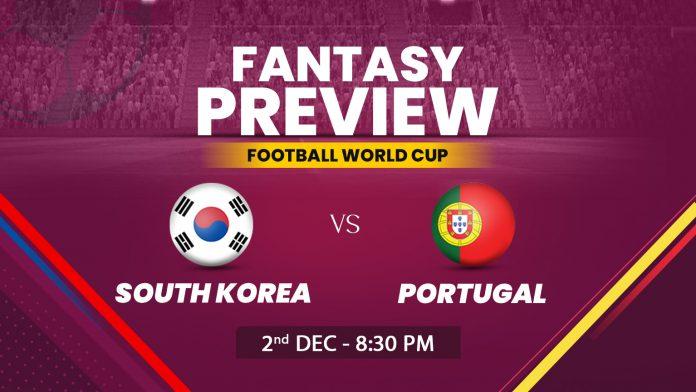 With the knockout stage taking more shape the South Korea vs Portugal match will be nothing less than fireworks for football fans. Portugal has already qualified for the Round of 16, whereas South Korea still has the sword of elimination hanging over their heads. The epic battle between the two teams will take place at the Education City Stadium at 8:30 PM IST on 2nd December. Read till the end to find out the fantasy team prediction for the match and fantasy XIs for the match.

The Tigers of Asia’s chances of making it to the Final 16 are very slim. They need to topple the European giants to stand any chance of qualifying in the knockout stage of the tournament. The Tigers of Asia need to beat Portugal, whereas Uruguay has to beat Ghana. If these scenarios happen, South Korea will make it to the Round of 16. The last time Son’s team made it to the knockout stage of the tournament was in 2010.

Portugal has saved their place in the Round of 16. Now, C. Ronaldo and co. will look to secure the top spot in Group H when they take on South Korea in their last group-stage match in the 2022 Football World Cup. While they are in the Final 16, Portugal has not been past the round of 16 since the 2006 tournament.

The Education City Stadium is situated in the heart of Al Rayyan. The stadium has hosted some of the most dramatic matches of the 2022 Football World Cup. Education City Stadium’s seating capacity is over 44,000 people. The record attendance in this stadium is 44,259 fans during the match between Poland and Saudi Arabia.

Son (South Korea): Hotspur’s star forward Son is a great asset to the South Korean football team. The 30-year-old forward is set to win his 107th cap for his national side. Son’s pace is feared by many, as he switches from first gear to fifth gear in a blink of an eye.