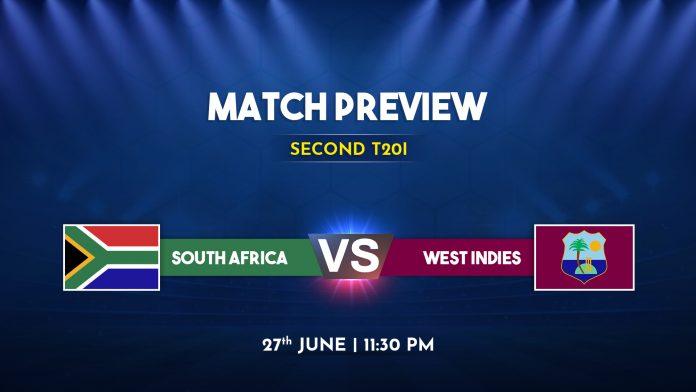 West Indies and South Africa will meet again on a successive day for the second T20I game tonight. Windies won the opening game in style and they would look to add one more win to strengthen their series win chances.

West Indies started their T20 WC preparation with a thumping victory in opening T20I. it’s a great start for them in the journey of 15 T20I matches this home summer. Pollard’s men chased down the target in just 15 overs to send a message to all teams that World Champions are ready to come stronger in T20 WC. They recently hosted Sri Lanka and won the series 2-1 and now, made a fluent start of the home summer.

South Africa made a good start in the first half of the innings but they failed to add the acceleration in the last overs. Dussen scored a vital 56 off 38 balls to get 160 for his side. De Kock also got a good start but he got out on 37. Russell picked for the 5th time in T20 format.

The Bowling unit was also average while defending the total. The opening duo added 85 runs in just 7 overs. It cleared the game for Windies. Proteas bowled some tight overs after picking Fletcher but Lewis looked dominating. Lewis scored 71 off just 35 balls. Gayle and Russell did the final job of crossing the line.

West Indies have a quality batting unit and in the last game, the bowling unit did a good job. They have so many allround options which are their big strength. Meanwhile, South Africa’s poor show in this format continues as they have won only two games in the last 10 games. They lost to Pakistan twice and England once in the last three T20I series post covid. Proteas would look to bounce back and they have to learn that they can’t stop Windies with a total of 160. Bowling in powerplay will also matter. Big players like De Kock, Rabada, Nortje, and Miller had played Indian T20 League so their game will be crucial. Toss will play an important role tonight.

St George’s surface in Grenada is a pure batting wicket but and it wil be a flat track to get easy runs. Bowling first would be an ideal call after winning the toss. 180-200 would be a competitive total on this surface.