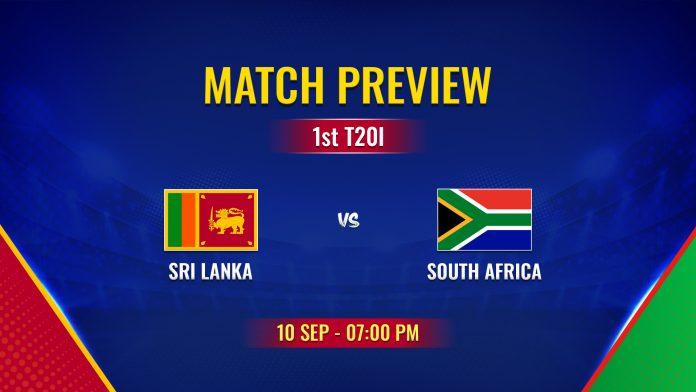 The brawl between South Africa and Sri Lanka continues, as the two rivals move to the next step of the South Africa Tour of Sri Lanka, with the scorecard in the favor of the invitees, 2-1 in the ODI series. Today, the two teams are set to play the first T20I of the 3-game series, while South Africa hopes to make a comeback; Sri Lanka is hoping to maintain their performance.

Sri Lanka is trying to make a loud and clear comeback to win their spot in the T20 World Cup after being completely whitewashed by England. The team seemed to lack the skills that could beat the English players. After that, Sri Lanka managed to defeat India, but that could’ve been because India’s key players were made to quarantine due to COVID positive results. Their win against South Africa too could be the comfort of home grounds and familiarity with the conditions.

South Africa too is in this battle to win their spot in the T20 world cup tables. The games played by the team recently, have not turned out in their favor, a win could help them bring back the momentum and they can make a comeback into the game of cricket as well. Both the teams have made significant changes to their team in hopes that they can clear out some rough edges. They know that this is the deciding series for both of them before the World Cup.

The maximum temperature today will be 30 degrees Celsius, while the lowest could be 27. Colombo might see a little precipitation during the day, but it would clear out by the evening. The day could be windy with a speed of 13km/hr and wind gusts of 22 km/hr. The humidity is about 55%.

The pitch of R. Premadasa Stadium, Colombo does not favor pace bowling and is not a flat track like the one in Galle. The pitches in Sri Lanka, in the entire series, are known for being tired. Just like the ODIs, both the teams should continue to trust the responsibility of winning on their spinners. The pitch, mostly used for tests, is a slow one and the batsmen will have to work to put up a high score against their opponent.

The two teams have played 13 matches against each other in the T20 international format. Out of these matches, Sri Lanka has won 5 while South Africa has won 7. The last time, the two teams played a T20 match was 2 years ago in Johannesburg, with the results in favor of South Africa.

Maheesh Theekshana: The 21-year-old debutant has proved to be one of the key players in the ODI series. He made a record by taking 4 wickets for only 37 runs and was the cause of the South African batting lineup crash. The opposing team's batsmen struggled with the debut bowler's flawless carom balls and his stock-off breaks. Theekshana really came as a surprise to all and a blessing to his team and the youngster also broke the debut spinner records of Sri Lanka.

Dushmantha Chameera: Yet another bowler from the Sri Lankan side, has proved to be quite a key player for his team through the ODI series. The dismissal of Hendricks and Dussen helped build pressure on the opponents and the crashing of their middle order as well. The bowler also added 29 runs to the scoreboard at number 9 while batting for his team.

Kagiso Rabada: he lives up to the reputation of always being the key bowler for his team. Though the results of the ODI series are not on his side, the bowler never failed to perform. In the last game, he made the Sri Lankan batsmen struggle with the runs. In the second ODI, the bowler took down Avishka Fernando and Bhanuka Rajapaksa, at a difference of four balls. His bowling always proves to be a challenge to even top batsmen.

Quinton De Kock: he is expected to be back for today’s match, and always the young man has proved to be one of the top T20 batsmen internationally. He also is an excellent wicketkeeper. Quinton De Kock has played 54 T20 matches in his career with an average of 32.76. He also contributed a great deal in saving runs and taking wickets from behind the stumps. De Kock can prove to be one of the game-changers for South Africa in the series.