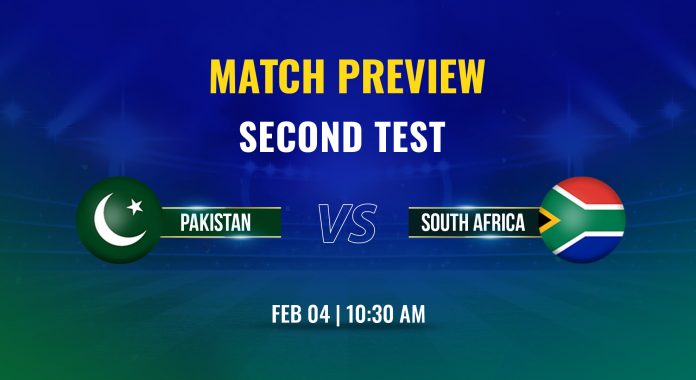 South Africa will play its final test of the World Test Championship against Pakistan and the Proteas would look for a strong comeback after facing loss in the first Test.

Pakistan and South Africa reach Rawalpindi for the second Test of the series. It will be a final assignment for both sides in World Test Championship 2019-21. Australia’s South Africa tour has been postponed and Proteas will end its WTC campaign in Pindi Stadium. Pakistan had the last laugh in the opening Test where some batting collapse from South Africa made the task easier for the hosts. If Pakistan wins here or manages to draw this Test, it will end its winning drought against South Africa. Proteas had the better edge in the longer format of cricket and Pakistan can break this long wait. Proteas would also look for the breaking Asian jinx as they last won a Test in Asia 7 years ago when they defeated Sri Lanka at Galle. Since then, they have been winless in 13 Tests.

South Africa had their issues in batting where they didn’t capitalise after getting a good start. In the first innings, they collapsed from 108/2 to 220 all out. In the 2nd innings, South Africa were on the driver’s seat when Markram and Dussen put a solid stand of 127 runs. The duo scored half-centuries and South Africa were looking to get a solid lead in 2nd innings but in the last hour of the third day, they lost all the momentum. Visitors formed another collapse and lost the last 9 wickets on 70 odd runs. From 175/1 to 245 all out is a terrible story for them. It could have been South Africa’s game. The other story formed with bowlers who offered Pakistan to settle after picking 4 wickets on just 27. Pakistan got 378 in the first innings when they were 6 down on 176. They had a decent outing with the bowl and Rabada was also in prime touch but he couldn’t make his numbers great. Markram’s comeback half-century is a big boost ahead of the second Test. Plessis and De Kock both had a dull outing with the bat and the South African would expect some fire from both batsmen.

Meanwhile, the hosts are highly boosted after a victory against a better-ranked side. Their previous Test victories came against Sri Lanka and Bangladesh. Nauman Ali’s 5-wicket haul and Fawad Alam’s gritty hundred showed how Pakistan performed with the experience. The top-order will be a big concern and it’s been a long time since we saw Pakistan's top-order performing in Tests. Imran Butt and Abid Ali added 27 runs in both innings. The skipper struggled against the spin and in both innings, Maharaj had the edge. Azahar Ali continued his top form and scored 51 and 31 in the first Test. Faheem Ashraf scored 64 and got another Test half-century. Hasan Ali was off the colors but changes are unlikely to happen and Babar will go ahead with the winning XI. Yasir Shah and Nauman Ali will be crucial in this Test. Pakistan are surely a favourite side for this Test and likely to take the series 2-0.

Rawalpindi’s track is a bit similar to Karachi but Pindi’s surface has a slight bounce on it which may help the pacers in morning sessions. Spinners will be in command on the fourth and fifth day. Batting would be easier on the first three days.