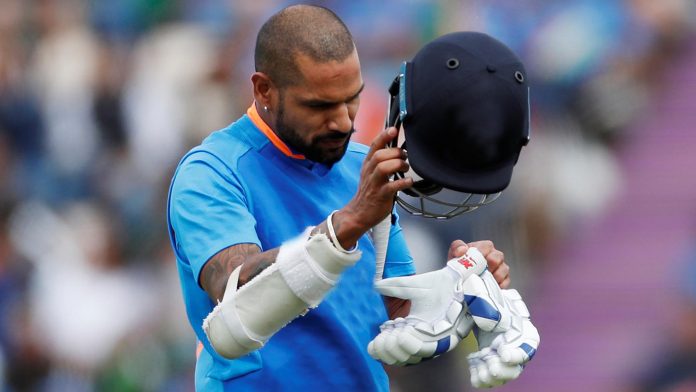 India’s left-handed opener, Shikhar Dhawan, has been ruled out of the ongoing World Cup due to a thumb injury. Shikhar Dhawan will not be seen on the field for the upcoming matches against New Zealand, Pakistan, Afghanistan, West Indies, and England.

Playing against Australia at the Oval, Dhawan was hit on his left thumb. After that, he looked in pain but somehow batted for the entire innings and played a match-winning knock of 117 runs.

However, the 33-year’s old batsman didn’t field for the team for the entire Australian innings. Ravindra Jadeja performed the job for the team in place of him.

Talking about his recent form, the left-hander played two matches for India in this tournament yet, in which he already has one century. But, now the fact is that he will not play for the team for the upcoming few matches.

So, Lokesh Rahul is the most prominent contender to open the innings with Rohit Sharma in his absence. The news coming from sources suggests that his IPL teammates Shreyas Iyer or Rishabh Pant will be included in the 15-member squad.

The Indian team will play their next match against New Zealand at Trent Bridge, Nottingham.