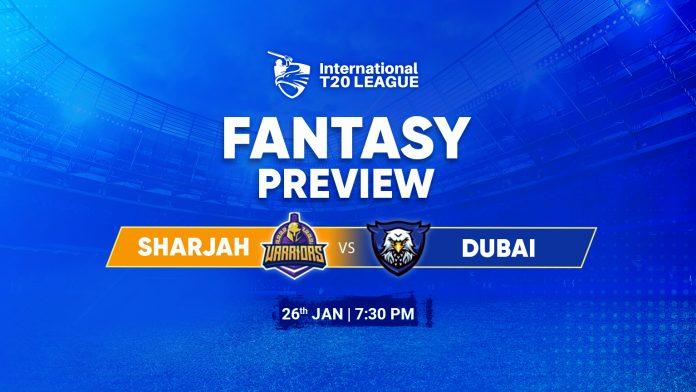 Sharjah Cricket Stadium will host the 17th match of the International T20 League between Sharjah and Dubai. The match will mark the beginning of the 2nd half of the tournament. In the previous meeting between the teams, Sharjah defeated Dubai by 7 wickets. Let’s dive into the fantasy preview of the match including match venue, timings, star players and suggested fantasy teams.

After suffering a hat-trick of losses, Sharjah has bounced back with consecutive victories against Dubai and Gulf respectively. Led by English all-rounder M. Ali, Sharjah has a balanced batting lineup featuring big hitters like Kohler-Cadmore and Malan while they also have dependable batters in Denly and Gurbaz. The bowling attack is led by the pace duo of N. Ul Haq and J. Siddique and both pacers have picked up 7 wickets in the tournament.

Dubai defeated Emirates in the last match and finally broke their three-match losing streak. Although Dubai features the likes of Root, Uthappa and Shanaka, skipper R. Powell is the heartbeat of the team. Veteran Indian batsman Y. Pathan is also a crucial part of the team and leads the middle-order of the team. Mystery spinner M. Ur-Rehman does the magic with the ball and the team will have high expectations from him in the crucial match against Sharjah.

The match will be played at the batting-friendly Sharjah Cricket Stadium. It is a small ground and runs galore at this venue where teams have comfortably chased down 200-plus targets. The match is scheduled to start at 7:30 PM on 26th January 2023. Lineups for the match will be available at 7:00 PM on the MyTeam11 app.

Sharjah Cricket Stadium has a flat deck where bowlers get very little help. The dimensions of the ground also favour batsmen and even miss hits fly over the fence. Spinners can expect wickets if they can tempt batsmen to go for big hits and deceive them in the air.

Weather forecasts are predicting heavy showers in the evening, so keep an eye out for updates on reduced overs. However, if we have a game with reduced overs, fielding first should be an obvious choice.

T Kohler-Cadmore (Sharjah): The aggressive opener played a match-winning knock against Dubai in the last meeting between the teams. Cadmore scored 106 runs in just 47 balls while sending the ball over the ropes six times. He will once again be a player to watch out for.

R Powell (Dubai): Dubai’s captain played a match-winning knock of 97 runs and guided the team to their second win of the tournament. Powell has scored 227 runs and is the third-highest scorer in the tournament. Apart from his brilliant batting performances, he has also taken 5 wickets. Sharjah needs to come up with a game plan to stop him in the next match.

Hope the team preview was useful for you. It’s now time to join exciting cricket action on MyTeam11. Make your fantasy teams in the International T20 League to win big cash prizes. Also, if you want to win rewards like iPhone 14, iPad and Samsung Smart Watch, you can take advantage of the Refer & Earn campaign on the MyTeam11 app.