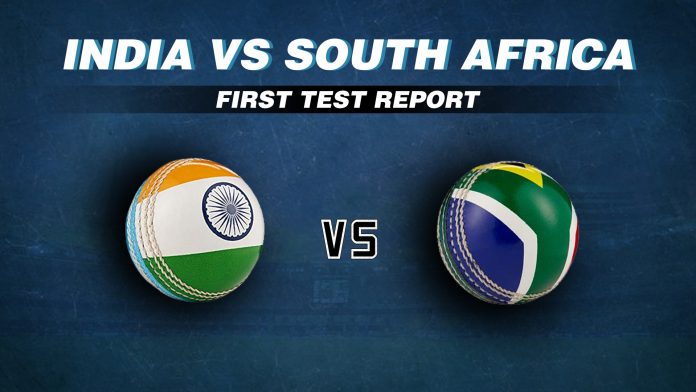 Mohammed Shami's fifer coupled with Jadeja's 4/87 led India to a comfortable win against the Proteas at Vizag. The ninth-wicket pair showed the top order how to bat. Dane Piedt hit his maiden fifty, shared a partnership of 91 with Senuran Muthusamy but Shami came back and took five wickets as India won the Vizag Test by 203 runs to take a 1-0 lead in the three-match series on Sunday. The win gave Virat Kohli his 29th victory as Test captain and India made it three out of three in the World Test Championship.

In the past, South Africa had made a habit of stonewalling on the final day in order to secure a draw. It happened in Australia. It happened in Sri Lanka. It almost happened in 2015 in India but they failed. The day started badly for South Africa when Theunis de Bruyn dragged an offbreak that shot through low back onto the stumps to give Ashwin his 350th wicket. In his 66th Test, this was the joint-quickest to the landmark, level with Muttiah Muralitharan.

Aiden Markram looked in confident touch and he launched Ashwin for a big six. However, India were boosted by a magnificent spell of reverse swing bowling from Mohammed Shami in the second hour of play and he was well assisted by Jadeja who ran through the lower order. Shami first removed Temba Bavuma with an inducker that stayed low. Bavuma tried to defend but the bann sneaked under and he fell down to witness the stumps in a mess.

The ball to Du Plessis was simply outstanding. Shami pitched the ball on a good length and the ball tailed back in late. The South Africa skipper left the ball on length but the ball crashed into the off stump and India had removed the one player who could have helped South Africa draw the match. Quinton de Kock, the centurion of the first innings, was undone by a fullish ball that swung back in and he played down the wrong line to knock the off stump out.

Shami had ripped the middle order apart. Now, it was Jadeja's turn. The left-arm spinner lured Markram into a lofted drive but Jadeja stuck his left arm and took a stunning one-handed catch. He proceeded to trap Vernon Philander and Keshav Maharaj LBW. South Africa had lost five wickets for 18 runs and they were well and truly out of the contest.

However, India's similar problem of not able to run through the tail was again exposed, this time by Dane Piedt and Senuran Muthusamy. Both batsmen negotiated the spin well and struck some confident boundaries to frustrate India. Kohli took the extra 15 minutes before the lunch break but India were unsuccessful in dislodging the duo.

After the break, Muthusamy and Piedt made the Indian bowlers toil. Piedt notched up his maiden fifty and he looked in great touch, with Muthusamy giving him solid company. However, Shami returned and struck with his first ball when Piedt inside-edged a length ball that stayed low back onto the stumps. The 91-run stand for the ninth wicket was a lesson to the Proteas top-order as to how they should have played on the final day. Kagiso Rabada struck some boundaries but he only delayed the inevitable. Fittingly, Shami got Rabada to edge an outswinger and India were the victors.

The Vizag Test, though, will be remembered for Rohit Sharma and his brilliance. His two tons as an opener, 13 sixes in the match, has brought back an intimidating factor in the Indian Test top order. The onus will now be on him to ensure he maintains his form ahead of the two Tests in Pune and Ranchi.