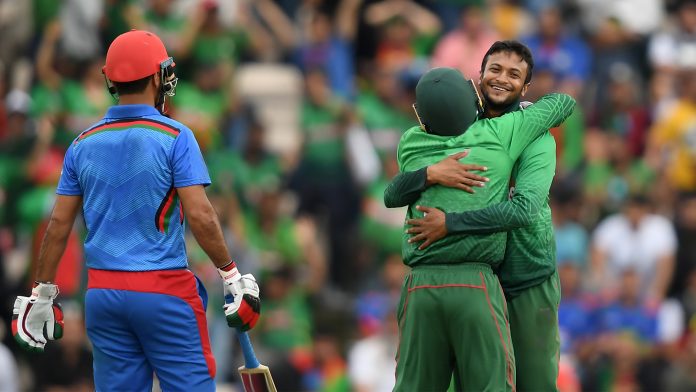 Currently, the number one all-rounder in the One-Day International, Shakib Al Hasan is in the best form of his life. In the World Cup 2019, the 32 years-old Bangladeshi stars have proved again and again that why he is holding the top position. In the 31st match of the ongoing tournament where Bangladesh defeated Afghanistan, Shakib once again emerged as Bangladeshi hero due to his all-round masterclass.

Before the match, Afghanistan skipper, Gulbadin Naib won the toss and elected to bowl first. Bangladesh didn’t get off to a good start as Mujeeb Ur Rahman dismissed opener Liton Das early. Shakib Al Hasan then stitched 59 runs for the second wicket that provided some stability to the innings. Shakib played a sensational knock of 51 runs. The innings got impetus by the wicket-keeper batsman, Mushfiqur Rahim who smoked 83 runs and was aided by Mahmudullah and Mosaddek Hossain. In the end, the Bangla tigers managed to reach challenging a total of 262 runs in their 50 overs.

Reacting to chase, Afghanistan opening batsmen, Gulbadin Naib, and Rahmat Shah started steadily. They both added 49 runs for the first wicket, but none of them capitalized on the start. Shakib Al Hasan firstly dismissed Rahmat Shah at 24 and then sent his partner, Gulbadin Naib back to the pavilion when he was at the score of 47 runs. After this, Samiullah Shenwari was the only Afghanistani batsman who showed some fight. But due to lack of support from the other side, at the end, Afghanistan fell short by 62 runs. Hence getting their seventh consecutive defeat of the World Cup 2019.