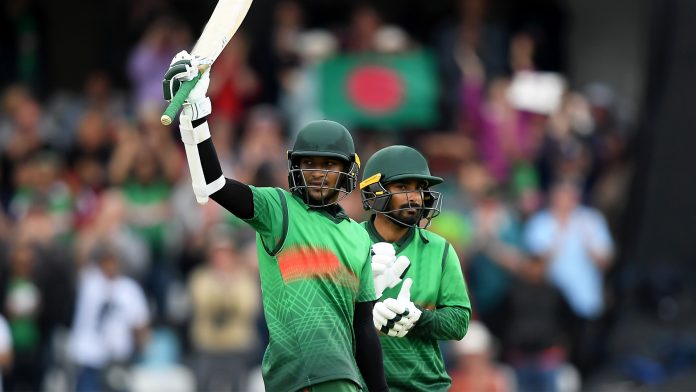 Bangladesh became the first team of the World Cup 2019 to chase a 300 plus total successfully. Apart from this, Bangladesh pulls off the second highest in World Cup history. Shakib al Hasan‘s sublime 124* followed by Liton Das brilliant 94*were the heroic performances in the chase.

On the pitch that looked to support the bowlers due to overcast conditions, Bangladeshi skipper, Mashrafe Mortaza won the toss and opted to field first. After Chris Gayle’s 13 balls 0, the prolific second wicket partnership of 116 runs between Evin Lewis and Shai Hope laid the foundation for other batsmen to play attacking cricket. Evin Lewis scored 70 runs with the help of six fours and two sixes while Shai Hope’s steady 96 runs knock contained four boundaries and one six.

Reacting to the chase, Bangladesh openers, Tamim Iqbal and Soumya Sarkar added quick 52 runs for the first wicket before Andre Russell dismissed Soumya Sarkar at 29 runs. After this the Bangladeshi great, Shakib Al Hasan joined Tamim Iqbal and counter-attacked the Windies bowler. But, in the middle of the Bangladesh innings, Windies bowlers took two quick wickets to get them back in the match.

After this Liton Das came to the crease and clubbed an unbeaten 94 runs off 69 balls. 189 runs stand between him and Shakib al Hasan in just 23 overs made the destructive Windies bowling attack ordinary. The Windies bowlers looked ordinary on a flat batting surface, failing to stop Shakib and Liton at the end. Hence, after this brilliant batting display from these two batsmen, Bangladesh chased down the target of 321 with eight overs left.

Bangladeshi all-rounder, Shakib al Hasan bagged the ‘Player of the Match’ award for his brilliant performance, i.e. 2/54 in 8 overs & 124* off 99 balls