Series Update: India beats Aussies by 7 wickets, Registers a 2-1 series win Down Under 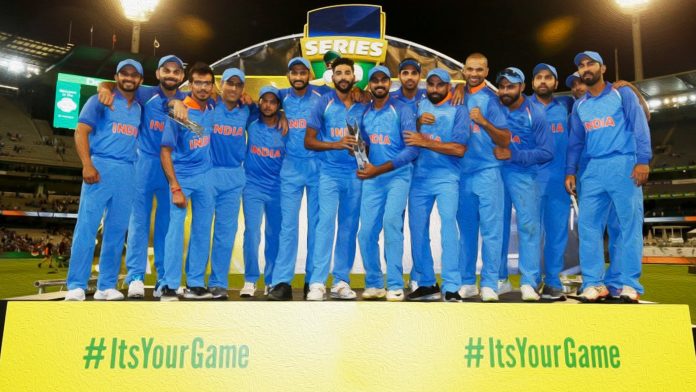 The thunderous battle between Australia and India finally came to an end on Friday with India registering a 2-1 series win against the hosts. India defeated the Baggy Greens by 7 wickets to win their second ODI game and register the series under their name.

The 3rd ODI started on Friday with India opting to the ball first against the Aussies, which proved to be a hell of a smart move. The stars of the game were Mahendra Singh Dhoni and Yazuvendra Chahal, who were adjudged as ‘Player of the Series’ and ‘Man of the Match,’ respectively.

Well, with a historic ODI win at Melbourne, India registered their maiden bilateral ODI win at the Australian soil, becoming the first country to return with losing a single series at Down Under. India won the Test series by a 2-1 lead, the ODIs too by 2-1 while sharing the T20 title with the Aussies, drawn at 1-1.

India knocked-out the Baggy Greens for a total of 230 before beginning their chase of 231 runs. The Blue Army started comparatively slower than the previous matches as to mark a historic end of their tour Down Under.

Australian players tried their best to keep a tight grip on the Indian team and so as to not let the players take benefit of any loophole in the Australian team. The game started with India being forced to face a new ball which created a bit difficulty for the Men in Blue. But despite the difficulties, MS Dhoni didn’t fail to create his charm and scored a whopping 87 off 114 balls alongside Kedar Jadhav who scored 61 runs off 57 balls.

Team India will now face New Zealand at the New Zealand soil after 5 years. India’s Tour to New Zealand will comprise of a 5-matches ODI series and a 3-game T20 series. Let’s see whether Team India will be able to defeat the Kiwis at their home soil to become the Undefeatable. If you want to stay updated with the recent happenings of the sports world, then stay tuned to MyTeam11.