Ronaldo or Messi – Who is better? 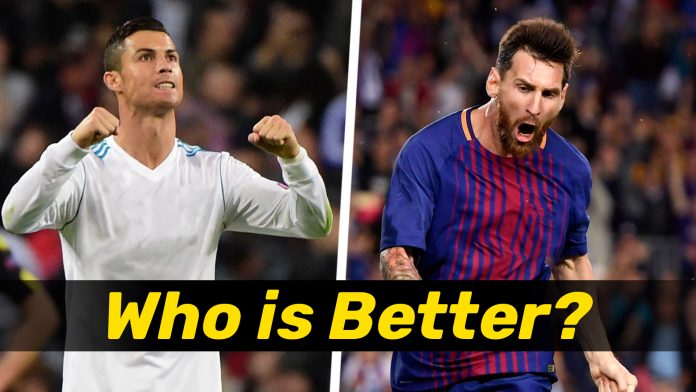 Considered as Greatest of all times (GOAT) and the best football players, the game have ever produced, Juventus’ Cristiano Ronaldo and Barcelona’s Lionel Messi have been dominating the football arena since long. They are the highest-paid soccer players and won matches for almost every clubs and teams they have played till now.

But, at the end there has to be the best, Ronaldo or Messi, who claims that position? Both these players share good rivalry on the ground, they are likely to play as usual in future as they have been proned to injury less number of times then other footballers. So, let’s have a look at what unique things these two football stars possess in them.

Born and bought up on Portuguese Island, Cristiano Ronaldo started his senior club career with Sporting CP. His athletism and physical strength has always been his major strength. No doubt, Messi is full of talent, but Ronaldo’s physical abilities and potential takes him ahead of Messi.

Messi has entered the finals of various tournaments but never won an International trophy while his competitor, Ronaldo, led his Portugal side to win the 2016 European Championship. With Real Madrid, Ronaldo won 15 trophies, including two La Liga titles and is the only footballer to reach 30 goals in six consecutive La Liga seasons.

Ronaldo always brings his A-game on the biggest stage. Along with the record of playing in most Champions League final wins (5), he also holds the record of scoring highest number of goals in the finals (3). He has been prolific and showcased some exceptional performances for Real Madrid and Manchester United over the years and now for Juventus.

Lionel Messi- ‘Magician’ of the game

Although both Ronaldo and Messi are top players of the game, still Ronaldo doesn’t possess Messi’s magic. The Argentine-born player has five Ballon d'Or awards under his belt.

Messi is a magician; the way he dribbles the ball is considered to the best in the game. Although Ronaldo’s physical ability always bring him into limelight but he can’t go ahead of Messi’s accuracy and precision is far better as he passes and shoots the ball more accurately.

When it comes to discipline, Messi is a much cleaner player than the Portuguese winger. The 29-year-old has just received 1 red card in his entire career which is far lower than Ronaldo who has received 10 till now.

So, MyTeam11 fans now is your turn to tell who is your favorite between these two!