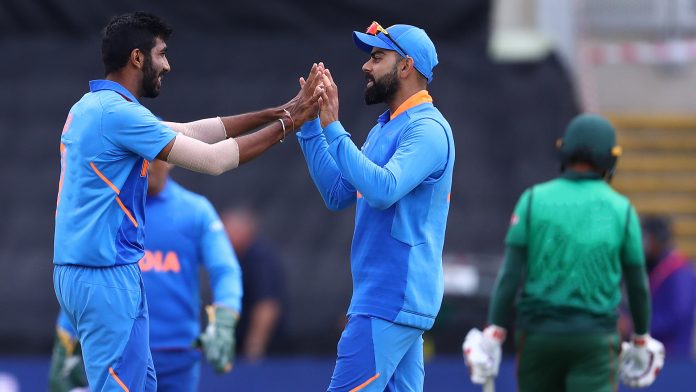 In the 40th match of the ongoing World Cup, Virat Kohli’s men fulfilled their objective and became the second team of the World Cup 2019 to qualify for semi-finals. In this match, Rohit Sharma broke Sourav Ganguly’s record after scoring the fourth century of this tournament. Previously, in the 2003 World Cup, Sourav Ganguly scored three centuries.

In the match Indian skipper, Virat Kohli won the toss and decided to bat first. The decision proved correct as Rohit Sharma and KL Rahul stitched 180 runs for the first wicket that laid the foundation for a big score. But, despite this sensational start Bangladeshi bowler didn’t allow Indian middle-order batsman to take the game away from them. Only Rishabh Pant and MS Dhoni managed to score above 30. The left-hander, Rishabh Pant played a crafty inning of 48 runs off 41 balls with the help of six fours and one six while the wicket-keeper batsman, MS Dhoni looked good for his 35 runs. In the end, India managed to reach a total of 314 runs in their 50 overs.

For Bangladesh, Mustafizur Rahman was the best bowler. In his ten overs, he conceded 59 runs and picked up five wickets.

Bangladesh, who have already chased a target of above 300 once again gave their best. Reacting to the chase, Shakib al Hasan and Mohammad Saifuddin scored half-centuries. Shakib Al Hasan scored 66 runs while Saifuddin played an unbeaten inning of 51 runs. But none of them got support from another end as the result of which the Bangla tigers felt short by 28 runs. After this loss, Bangladesh chances to qualify among the top four vanished completely.

Rohit Sharma was named ‘Player of the Match’ for his 92 balls-104 runs.