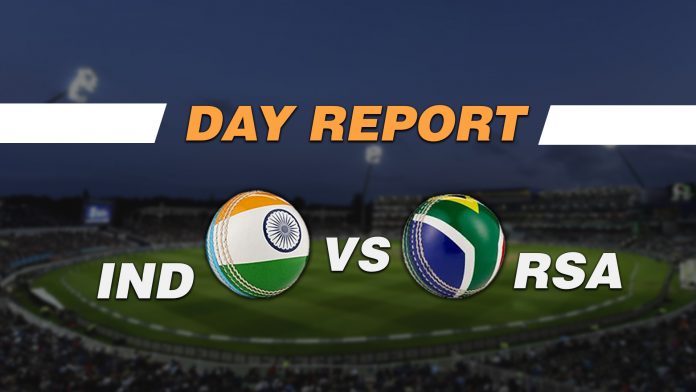 Both Rohit and Rahane started off confidently on Day 2 of the final Test. Rahane neared his century with a couple of fours off Anrich Nortje and Lungi Ngidi. Rohit, on the other hand, found the boundary on a regular basis as he eyed a big score. Rahane was the first to get to his landmark by tapping a single to point and his 11th century was his first in India since 2016. Rohit, on the other hand, went past 150 and the partnership continued to hurt South Africa.

Rahane decided to change gears by smashing two fours off Dane Piedt but on 115, he tried to steer George Linde to third man but the extra bounce and pace resulted in his dismissal and it handed Linde his maiden wicket. The 267-run stand had given India a huge platform from which they could rebuild. Ravindra Jadeja consolidated and Rohit also neared his double ton. When lunch was taken, Rohit was on 199 but on resumption, he wasted no time and he notched up his landmark with a six off Ngidi.  After another six off Kagiso Rabada, Rohit pulled a short ball to fine leg as his knock came to an end.

Jadeja and Wriddhiman Saha helped India cross 400. Although Saha fell for 24 and Ravichandran Ashwin for 14, Jadeja went past his 13th fifty but departed soon after. Umesh Yadav put on a show by smashing Linde for five sixes and his 10-ball 31 got India closer to 500 but his dismissal saw Kohli declare for the fourth time in the series at 497/9.

In response, Mohammed Shami and Umesh produced a fiery spell. Dean Elgar, after hitting a boundary, tried to drop his wrists to a bouncer but the ball hit the glove and Saha took the catch. Quinton de Kock, promoted to open, was undone by a brute of a bouncer from Umesh as he fended it to Saha. India tried bowling spinners but the light deteriorated and stumps were called early for the second day.