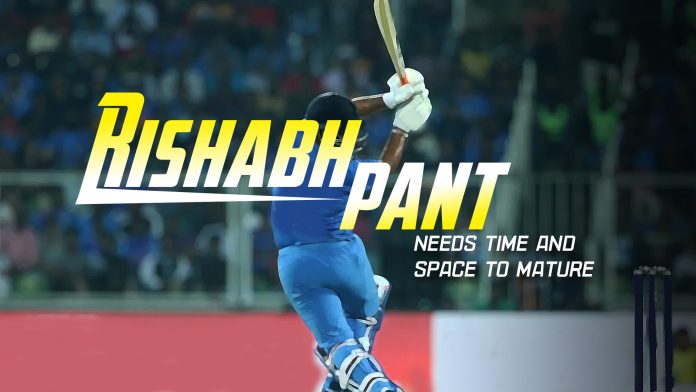 Since Dhoni is absent from the squad after 2019 World Cup, the responsibility to lead the position behind the stumps is on Rishabh’s shoulders. But unfortunately, Pant seems to be disappointing fans with his constant failures. He has been struggling with his form with the bat and behind the wickets as well, thus, making him a fodder for trolls and vulnerable to immense criticism from pundits.

Recently, during the second T20I match between Indian and West Indies, Pant dropped Evin Lewis’ catch off Bhuvneshwar Kumar’s delivery in the fifth over. Watching this, the crowd took an opportunity to make fun of wicket-keeper’s goof-ups by chanting “Dhoni, Dhoni.” Skipper Virat Kohli, who was standing near the boundary ropes, saw the audience spreading negativity all over the ground. Kohli expressed his displeasure over the spectators’ reaction and urged them not to chant Dhoni’s name in the stands and let Pant execute his skills in his own way.

Virat Kohli: Give him some space to support him

Kohli has always been a captain who encourages young talent to go beyond the impossible and give their best on the field. He has been backing Pant for a long time and given him many opportunities to get in the position. But the wicketkeeper-batsman has not been able to perform because he is being compared to Dhoni every now and then which tarnishes his morale.

Here’s what Virat Kohli said in a pre-match press conference before the Hyderabad game, “We certainly believe in Rishabh’s ability. As you say, it’s (also) the player’s responsibility to do well, but our responsibility is to give him space, to support him”.

He emphasized on the fact that Pant has the confidence of the team management. He further said, “If he misses a chance, people can't shout MS' (Dhoni) name in the stadium as well. It's not respectful because no player would like that to happen”.

Kevin Pietersen: Pant is too young to realize his full potential

Former England captain Kevin Pietersen also come in support of Rishabh Pant stating that he needs time to mature as he has many years to improve his performance and deliver his best. He said, “He is young and he has that energy and enthusiasm, he plays in the IPL, and he plays for India and is just living his dream. There will be a lot of critics around him, he’s only 21 (22)”.

He believes that former experts and players criticize Pant, not to humiliate him, but because they want him to learn from his mistakes.

Also Read: 3 CHANGES INDIA WILL LOOK TO DO IN 3RD T20 AGAINST WINDIES

Legendary West Indies batsman Brian Lara also feels that there is a lot of pressure on Pant that it is having an adverse effect on his form. He said, “I know the time is critical with the World Cup just 8 or 9 months away and they may even go with another keeper but the excessive pressure on him is unnecessary”.

Lara brought asserted that Pant debuted with such aggression and excitement that Indian public experts were convinced to replace Dhoni immediately. So, we must keep faith in him and let this budding player discover his true potential in the coming time.