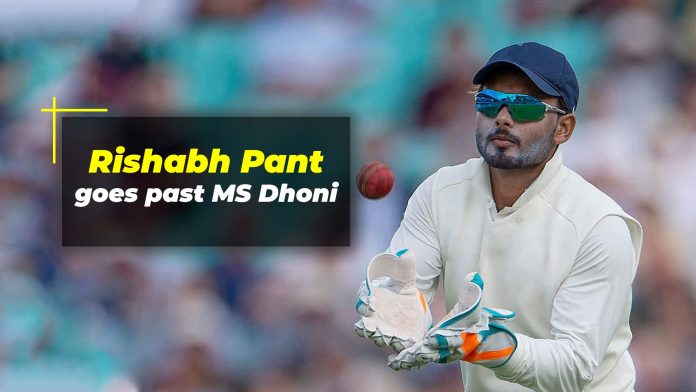 India’s new wicket-keeper, Rishabh Pant seems to be riding a success slay, with achievements after achievements. Recently, the young lad claimed the title of fastest 50 dismissals in the longer format of the game, surpassing team India’s former skipper, MS Dhoni.

The feat came when Rishabh Pant dismissed Kraigg Brathwaite as caught behind off Ishant Sharma on the Day 3 of the recently concluded of 2nd Test during India’s tour of West Indies. It took nearly 11 Test matches for Pant to achieve this distinction, whereas, MS Dhoni took around 15 matches to get to the position, previously.

Pant also shares the title of the second-fastest keeper with Adma Gilchrist who went to 50 dismissals in a similar number of tests. Talking about the first spot in the list of fastest keepers, then the position is shared by Mark Boucher, Jos Buttler, and Tim Paine, who reached the milestone in just ten tests.

Indian skipper Virat Kohli and the selectors look at Rishabh Pant as the future of team India who can be a forerunner to Dhoni.

"We are looking at Rishabh as the future, definitely. He has got a lot of skill and talent," Virat had said.

India’s Tour of West Indies came to an end, yesterday wherein the home team whitewashed India whitewashed West Indies in all the three formats to emerge as the tour champions.