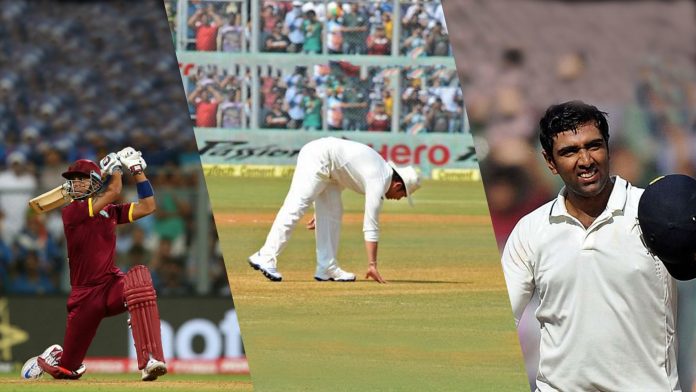 A test match made in heaven that left cricket fans with flippin’ murder in minds. It was for the second time in the history of test cricket where a match was drawn with the scores levelled after 4th innings. The first came in Bulawayo between England and Zimbabwe in 1996-97.

In the first two test matches played at Delhi and Kolkata, India unassisted West Indies quite easily. With 2-0 up in the series, India were the clear favorites to win, but the Caribbean giants jolted the Indian team and put massive 590 on the board in the first innings of the match. Left-handed batsman, Darren Bravo destroyed Indian bowling attack and scored brilliant 166 runs. Reacting to this total India made 483 runs, trailing by 107 runs.

Indian spinning duo of R. Ashwin and Pragyan Ojha gave their best performance to turn things around for the team. Combining ten wickets between then, they bowled West Indies for 134 on the fourth day leaving India a 243-run target to chase on the final day. Chasing 243 runs in the last day on Indian wicket is not an easy task. Virendra Sehwag & Virat Kohli pulled the match in favor of India, but with two runs needed of the final bowl of the match, the job was on Ravi Ashwin.

Ashwin managed to hit the ball down long-on and get the single to tie the scores, but was run out when he tried to return for the second run, resulting in the match being drawn.

"My life, between 22 yards for 24 years, it's hard to believe that the wonderful journey is coming to an end."

In the 2nd test match played between India and West Indies in 2019, a legend retired leaving behind a legacy that only a few people can even imagine.

Sachin Tendulkar walked out to bat for the final time in international cricket at the Wankhede Stadium, Mumbai. He struck 74 runs in his final innings. With some of his trademark shots, this innings gave a glimpse of vintage Tendulkar.

The moment came in the post-match presentation when the Master-Blaster delivered an emotional speech that left cricket fans with tears in eyes. In his 20 minutes’ speech, he thanked all the people and fans who supported him in his career right from his aunt to all the fans and team members.

In search of the key to open the doors to final, India and West Indies took on each other in the semifinal of ICC T20 World Cup 2016. With the stakes high, Indian team batted first and posted a mammoth total of 192 runs on the board. Virat Kohli looked great for his half-century.

However, West Indies came strong with quick fifties from Lendl Simmons and Johnson Charles along with Andre Russell‘s fiery knock at the end of the innings. West Indies chased down the total with two balls spare.

Two no balls shut the doors for the Indian team. Ironically, on both the occasions Lendl Simmons was at the receiving end who got out both the times, but fortune favors the brave. His 82* laid the victory foundation for West Indies.