Ranji Test Trophy Round Up: Round 1, Day 2 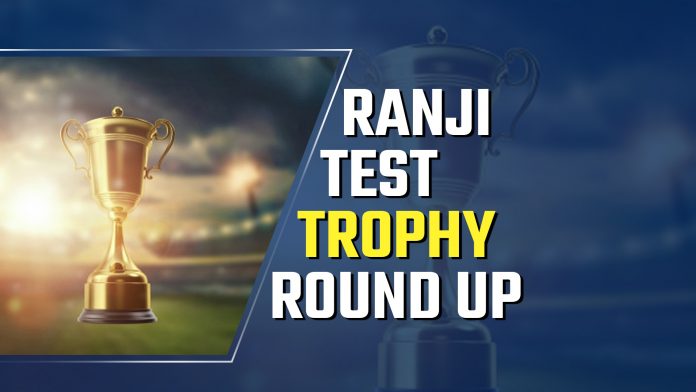 The first round of the most-anticipated domestic tournament, Ranji Test Trophy is underway and the second day of this domestic tournament witnessed intriguing action. This edition started with a cracker, as Day 2 saw Mumbai giving a tough competition to Baroda, and Karnataka tightened the screws in their fixture against Tamil Nadu. Kerala mustered advantage over Delhi, while defending champions Vidarbha grabbed a firm control on their fixture against Andhra Pradesh. The talking points of Day 2 were Arslan Khan, who scored a double ton and Sanjay Yadav, who scalped nine wickets against Nagaland.

Here are the highlights of the matches:

Skipper Sachin Baby grinded Delhi attack to hit 155 and Kerala gained complete control by posting a 525 for 9. With the efforts of Robin Uthappa (102) and Ponnam Rahul (97), Kerala went past the 500-run mark. On the other side, Delhi lost two of its openers, namely Anuj Rawat and Kunal Chandela. Delhi ended the day on 23-2 with skipper Dhruv Shorey and Nitish Rana at the crease.

Mumbai were on the verge of getting their first innings lead after reducing Baroda to 301/9. Shami Mulani played responsibly with both bat and ball and hammered 11 fours and two sixes in his 141-ball knock. Opener Kedar Devdhar also stole the limelight with his unbeaten 154 runs, striking 20 fours and a six in his 184-ball.  Domestic giants Mumbai gave a hard time to Baroda and made it an uphill task for them to go past the former’s first innings total.

Saurashtra dismissed Himanchal Pradesh for just 120 in the first innings. They lost five wickets, including that of Cheteshwar Pujara, who scored only 14 off 16 before heading back to the pavilion. In the second innings, skipper Jaydev Unadkat came to the party and HP managed to grab 182 runs. Saurashtra beat Himachal and registered their first win of the season with six points.

Karnataka started the day at 259-6 and bagged 336 runs with the half-century from Krishnappa Gowtham. Prominent players namely, Abhinav Mukund (47) and Murali Vijay (32), gave a good start but did not clinch a mammoth score. Much of Tamil Nadu’s hopes lied on Dinesh Karthik’s shoulders, who made a compelling 113 and was the last man dismissed.

Haryana acquired a dominant position by reducing its opponent Maharashtra to 88 for 4 after making 401 in the first innings. Opener Shubham Rohilla and middle-order batsman Shivam Chauhan exhibited fabulous performances and added 122 runs, especially when the rest of batting order folded. Haryana gained clear advantage over the rivals by picking up wickets at regular intervals.