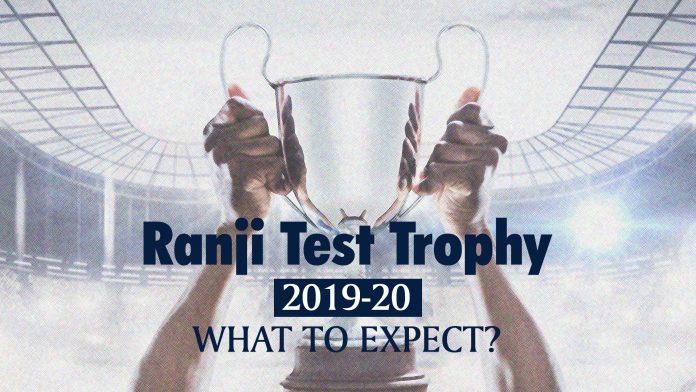 While international matches guarantee recognition and establish reputation worldwide, domestic cricket championships between regional teams are the real test of the temperament of players. One such test is ‘Ranjit Test Trophy.’ This is the 86th season of the tournament that is slated to be conducted between December 2019 and March 2020. Chandigarh will compete in the tournament for the first time. This year, the battle is going to be super exciting and spectators will get to be a part of edge-of-the-seat experience. As Karnataka coach Yere Goud said, “But Ranji is altogether a different tournament. The skills come into picture. It’s about how our batsmen negotiate the opening spell of good fast bowlers, play on turning tracks. As for the bowlers, a lot depends on how they succeed on different pitches”.

Let’s find out what Ranji Test Trophy has in store for sports fans.

The teams are divided into following groups:

On December 9, Delhi will open their season against Kerala at Thumba. Ishant Sharma will not be a part of the squad for the first two rounds. The Delhi and District Cricket Association (DDCA) has named four standby(s) : Pranshu Vijayran, Kshitiz Sharma, Sarang Rawat, and Karan Dagar. Dhruv Shorey will be leading the unit and Nitish Rana will be the vice-captain.

The batting continent will be headlined by a new captain – top-order batsman Suryakumar Yadav. He has returned as a full-time captain for the first time since 2014-15 season. One of the mainstays in Mumbai, Siddhesh Lad, will skip the first match of the season because of his wedding preparations. The other prominent player missing from the 15-man squad is Shreyas Iyer, who is away on national duty.

Karnataka is riding high on success, having annexed two domestic T20 titles this season. Now, the team is eyeing for a treble. Karun Nair has been handed the team’s captaincy and will lead the side with Shreyas Gopal as his deputy. The talented R Samarth and D Nischal aim at scoring big numbers on the board.

The team will miss the services of A. Mithun, Prasidh Krishna, K. V. Siddharth for the opening match against Tamil Nadu. Mithun, who bagged 26 wickets in the last edition, is out due to his back spasm and Karnataka’s top-scorer in the previous season, Siddharth, is recovering from shoulder injury.

Tamil Nadu will be spearheaded by all-rounder Vijay Shankar and Baba Aparajith will be his deputy. While R Ashwin, Dinesh Karthik and Murali Vijay have occupied their place in the squad for the first two matches, Washington Sundar will join the TN team for the second game.