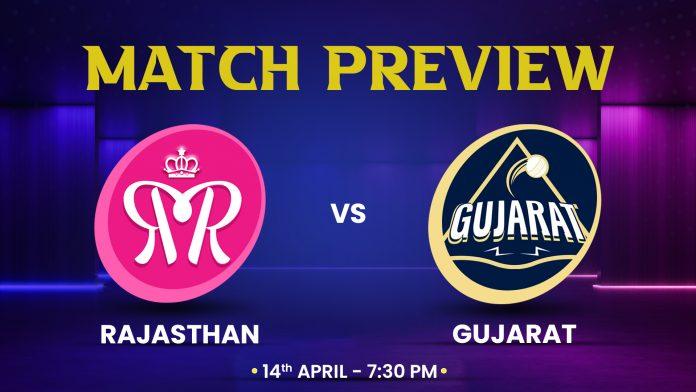 Rajasthan and Gujarat are ready to face off against each other for the first time in Indian T20 League 2022. Both these teams have impressed their fans with the perfect balance between their batting and bowling units.

Rajasthan is currently at the top of the table. Interestingly, the team has both the Orange Cap and Purple Cap with Jos Buttler and Yazuvendra Chahal rocking the respective caps. However, the team of Gujarat has surprised many with their resilience shown in the previous matches. Surely, the battle between both the teams will be one to watch as both the teams have the potential to lift the title of the Indian T20 League 2022.

Sanju Samson’s Rajasthan is performing brilliantly this year. Surely there were some concerns from the fans after this year’s auction, but Rajasthan looks more stable than ever. Openers Jos Buttler and Devdud Paddikal have been a valuable addition to the team. Currently, Buttler is the highest run-scorer (218 runs) of the tournament so far. The depth in Rajasthan’s batting lineup is something the team takes pride in. Sheldon Hetmyer has been a blessing in disguise for the team and delivers important runs for the team.

Without a doubt, Yuzvendra Chahal has been the biggest draw for the Rajasthan team. The former Bangalore spinner has taken 11 wickets so far in this season. Ashwin has always shown his mettle in the ground and recently contributed with the bat as well. It looks like Rajasthan has struck its perfect 11 this season.

Hardik Pandya’s Gujarat has been the ‘X Factor’ of the Indian T20 League 2022. Gujarat went undefeated in the first three matches. However, the team suffered its first loss in the last match against Hyderabad. But, except for that hiccup, the young side of Gujarat has performed well. Batter Shubhman Gill has come close to hitting a century in his first four matches. Gill has currently scored 187 runs with an average of 46.75.

The mix of experience and fresh players in the bowling division has proven to do the trick for Gujarat. Youngster Avesh Khan picked four wickets in one match and has pulled the team out of tough situations on more than one occasion.

The DY Patil Sports Academy has been one of the biggest wickets to bat on in India. This season, the toss-winning captain has elected to bowl first in spite of the dew factor. However, the team batting second has scored big runs because of the assistance offered from the wicket.

On April 14th, Mumbai is predicted to have clear skies.

Shubman Gill is a right-handed batsman for Gujarat. He has proven to be a great addition to the young team of Gujarat. Gill has impressed his fans with his performance in his four innings. Surely, as the tournament progresses, Gill will eye for the Orange Cap.

Hardik Pandya is an all-rounder for Gujarat. The captain of Gujarat is leading from front this season. Pandya hit a much-needed 50 runs in the last match. Additionally, Pandya has been contributing with the bowl as well.

Yuzvendra Chahal is now the highest wicket taker in the Indian T20 League so far. With 11 wickets to his name, Chahal has really changed the fate for Rajasthan. Surely, Chahal must be amped for his upcoming match in the season.

Lockie Ferguson has been a wonderful addition for the Gujarat team. The fast pacer took four wickets in one match and took the pressure off other bowlers in the squad.

Suggested Playing XI No.1 for Rajasthan vs Gujarat MyTeam11 Team:

Suggested Playing XI No.2 for Rajasthan vs Gujarat MyTeam11 Team: