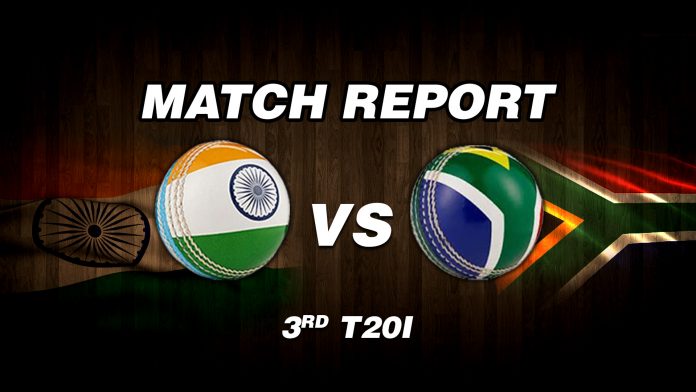 Quinton de Kock's blistering half-century coupled with superlative performance from the Proteas bowlers helped South Africa team to square the three-match T20I series against the host-India at M.Chinnaswamy Stadium in Bangalore. Earlier in the day, Indian skipper Virat Kohli's mind seemed to be in Australia while he was heading for the toss. The Indian skipper was apparently planning long-term for the 2020 World Cup. What else would prompt Kohli, who knows the M Chinnaswamy wicket like the back of his hand due to his IPL experiences, bowl on a deck where chasing becomes easier? His rationale at the toss was "I know it's a ground where teams chase well. Even in the IPL, it's a chasing ground. Heading into the World T20 though, we need to improve areas as a team. We know we're one of the top chasing teams. Batting first is something we're also looking to strengthen. Results are always a priority, but we need to get out of our comfort zone also. Come the World Cup, toss is not in your control, you should be able to perform whether batting or bowling first."

It is a good thing that India wanted to challenge themselves. However, against South Africa, it backfired spectacularly. Shikhar Dhawan was the only Indian batsman to cross 30 while the rest of the batting order fumbled to the discipline of Beuran Hendricks and Kagiso Rabada.

Dhawan started off brilliantly with a boundary in the first ball of the match while Rabada struggled for control, bowling three wides and getting hit for two boundaries by Rohit Sharma. However, Beuran Hendricks picked up on Rohit's weakness against the inswinging delivery and trapped him plumb in front for 9.

The left-handed Dhawan looked in great touch with a couple of boundaries off Andile Phehlukwayo and two sixes off Tabraiz Shamsi but the bowler had his revenge when Dhawan miscued a flighted ball to be caught at cover. Kohli, on the other hand, struggled big time and Rabada struck the killer blow. Kohli attempted the flick. Chinnaswamy was in anticipation for something special. That shot had made the cricketing world go ga-ga in Mohali. Here, the distance was not there and was caught at deep midwicket.

The platform was set for Rishabh Pant to silence his critics. He was playing a high-risk game and he showed his prowess with a scooped six off Dwaine Pretorius but Fortuin turned the game with the wickets of both Pant and Shreyas Iyer in the same over. In the death overs, South Africa bowled with discipline. Only four boundaries came in the final five overs and India were restricted to 134/9.

In response, de Kock and Reeza Hendricks started brilliantly. India did not help their causes by wasting a review and when de Kock missed a sweep off Washington Sundar, India had no reviews left after appealing for an LBW. Replays showed the ball was hitting the stumps and India had a deflated look. De Kock regularly found the boundaries but India had something to smile when Hendricks mistimed a pull off Hardik Pandya only to be wonderfully caught by Kohli at midwicket.

However, de Kock notched up his fifty with two boundaries off Hardik while Temba Bavuma got going with a couple of boundaries off Navdeep Saini. Both batsmen ensured South Africa got over the line without much issues. Foresight is a wonderful thing but when it is not executed well, things often fall flat.