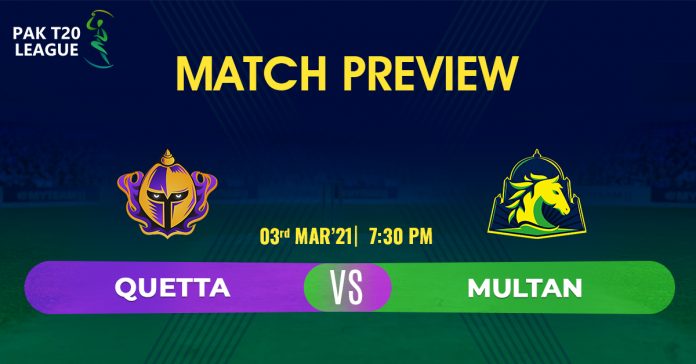 Multan and Quetta will take on each other in Pak T20 League to up the points-table game. It will be the first time, Mohammed Rizwan will play against Sarfaraz as the skipper of Multan.

Two bottom sides in points-table will lock horns in important clash of Pak T20 League 2021. Quetta will play back-to-back matches and Multan will appear after 3-days of the break. COVID issues pushed PCB to postpone Quetta’s game against Islamabad which was completed last night.

Multan’s campaign under Rizwan has been disappointing so far with three defeats out of four. The skipper continued his top-form with the bat but he couldn’t deliver victories. The toss factor has also played a key role in the outcome of their match and this season came out as a nightmare for those captains who lost the toss. No team hasn’t lost a single game while chasing and it’s happening for the first time in any league. In the last game, Multan was outplayed by defending champions. The collective batting effort from top-order helped Multan to post 195 on board. Rizwan missed out a half-century and James Vince scored 29-balls 45. Chris Lynn looked better in the last game with 14-balls 32 and it’s a big boost to Multan. Maqsood scored 34 and he could have accelerated more in death-overs. Multan scored just 22 runs in the final 3 overs and it created the difference, Karachi chased down this total with seven balls spare. Multan desperately needed a win here. The defeat can put them on bottom in the table.

Meanwhile, Quetta’s downfall continues since the league’s welcome in Pakistan from UAE After missing out the playoffs for successive seasons, Quetta lost all four games in the ongoing season of Pak T20 League 2021. In the last game, Quetta lost the toss and later, lost the match as well. Skipper Sarfaraz scored another half-century after early blows at the top. Quetta posted 156 which was not a sufficient total on a batting track. The acceleration was missing in death overs due to regular wickets. Islamabad chased down the target in 17 overs and Quetta delivered another bowling failure. Toss might be a big issue but team performance is a big issue. One more defeat will make their playoffs task pretty dull considering the other results. Changes are likely to happen after back-to-back losses and overseas players will be replaced.

Karachi’s track is good for batting and it offers a good amount of assistance to batsmen. Pacers have a slight advantage with the new ball. Any score above 200 would be a safe total on this ground.