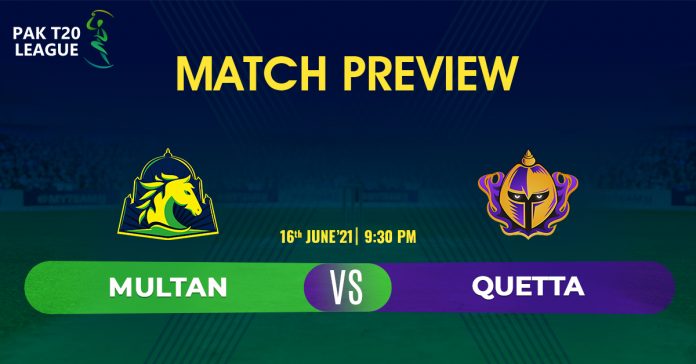 Multan and Quetta will take on each other in Pak T20 League to up the points-table game. Quetta ended their losing streak in the previous game and they have beaten Multan when they faced each other in Karachi two months back.

Pak T20 League’s league stage is going to wind up this week and we have a top clash tonight between Multan and Quetta. Multan moved into the top four due to Karachi’s poor show and they have a great chance to improve their points table with three more games.

Multan are coming off a 2-day break and they defeated Peshawar in the previous game by 8 wickets, thanks to Mohammad Rizwan and Maqsood’s century stand. Multan won back-to-back matches and they would look to get two more points to strengthen their position in the top four. Multan’s campaign under Rizwan was disappointing in Karachi's leg but the Abu Dhabi's leg was a positive surprise for this side. The skipper continued his top-form and delivered victories as well. The toss factor has also played a key role in the outcome of their match and this season came out as a nightmare for those captains who lost the toss.

Meanwhile, Quetta’s downfall is pretty disappointing and they made them alive in the Pak T20 League 2021after beating Lahore in the previous game. The best part is, they defended 158 with ease and their bowling unit performed very well in this game. Weatherald was introduced as an opener and he scored a vital 48 at the top. Sarfaraz and Azam also scored vital runs in middle. Acceleration was missing in the end despite having wickets in hand but bowlers did a good job. Usman Shinwari and Khurram Shahzad picked three wickets each.

Quetta have lost six games in the ongoing season of Pak T20 League and they cannot stop here as they have to win their all remaining matches to seal the playoffs. One more defeat will make their playoffs task pretty dull considering the other results.

Abu Dhabi’s track is good for batting and it offers a good amount of assistance to batsmen. Spinners have a slight advantage. Any score above 160 would be a safe total on this ground.

A hard-hitter and a quality middle-order batsman