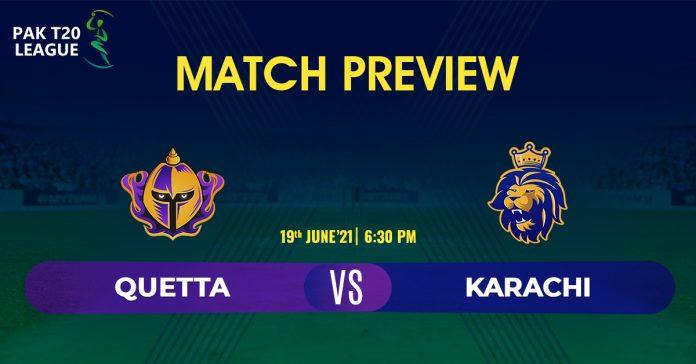 Karachi will take on Quetta in the virtual knock-out game of Pak T20 League 2021. It’s a do-die game for the defending champions to book the place in the playoffs.

Karachi and Quetta will lock horns in the first doubleheader clash of Pak T20 League 2021 and this one game will decide the fourth team in the playoffs. After the victory of Multan last night, three teams have qualified for the playoffs. The fight is now between Lahore and Karachi. Both sides were the finalists of the last season but this season, they failed to replicate the memory.

Karachi managed to win their previous game against Lahore by just 7 runs. Babar scored another half-century but the most satisfying part was Guptill’s 43. He got his form and Karachi posted 176 on board. Imad Wasim and Danish added some quick runs in the end. Imad’s captaincy was also on point and he backed his bowlers to defend the total in this must-win game. They maintained the required run rate at the top and kept Lahore silent. Faulkner and Tim David added some fire in the end but it wasn’t enough.

It’s a simple equation for Karachi now. They have to win this game if they want the place in the playoffs. They have now eight points and victory will give them two more points. With a better net run rate, they will knock Lahore out of the competition. Peshawar, Multan, and Islamabad have booked their spots in the playoffs.

Meanwhile, Quetta will wind up their disappointing campaign and for one more season, they missed out the playoffs. They failed to draw any attention in Karachi and Abu Dhabi's leg. They won one game out of five in Pakistan and the same results were seen in Abu Dhabi. They lost their matches with huge margins and showed how poor they have been in Abu Dhabi. The toss factor hurt their campaign in Karachi but Abu Dhabi's surface was ideal for their combination. They failed with the bat and ball both. The skipper is their top-scorer with 270 runs. There is not a single player in the top ten run-getters. In the previous game, they suffered a 110-run defeat which is one of the biggest losses in tournament history. Sarfaraz would look to try their bench in this game and they might spoil the party for Karachi. Defending champions had an upper hand over Quetta as they won three matches out of the last five. They also beat Quetta in this season.

Abu Dhabi’s surface is a decent T20 surface and we might expect a good score today. It’s an evening game so you can see the high-scoring game as the surface will be good for the batting. Chasing would still be a tough call.

Might be a crucial player with the spin, two for 19 in last game

Looked promising good for Quetta with the bat